Prime Minister Narendra Modi and President Vladimir Putin on Monday held the 21st India-Russia summit, covering an array of areas with an aim to further enhance the special and privileged strategic partnership between the two countries. 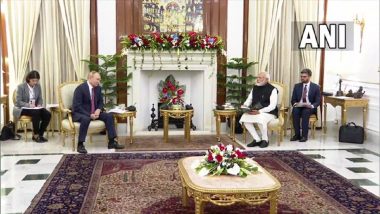 New Delhi, December 6: Prime Minister Narendra Modi and President Vladimir Putin on Monday held the 21st India-Russia summit, covering an array of areas with an aim to further enhance the special and privileged strategic partnership between the two countries.

In his initial comments, Modi said there is no change in the pace of relations between India and Russia despite the COVID-19 pandemic. Also Read | India Inks 4 Deals With Russia, Including Purchase of Over 6 Lakh AK-203 Rifles.

Modi said the special and privileged strategic partnership between the two sides was getting stronger and both sides remained in touch on the situation in Afghanistan and other issues. Also Read | Apple iPhone SE (2020) Now Available at Rs 27,999 on Flipkart; Check Details Here.

In the last few decades, the world witnessed many fundamental changes and different kinds of geopolitical equations and variables, but the friendship of India and Russia remained constant, Modi said. "Your visit to India is a reflection of your commitment to ties with India," the prime minister said.

The summit talks took place hours after the foreign and defence ministers of the two countries held their inaugural '2+2' dialogue with an aim to widen the ambit of discussions on strategically important issues. Putin flew into India on a short visit for the summit.

The day began with Defence Minister Rajnath Singh's talks with his Russian counterpart Sergey Shoygu under the framework of the India-Russia Inter-Governmental Commission on Military-Technical Cooperation.

At the end of the talks between the defence ministers, both sides inked an agreement for joint production of over six lakh AK-203 assault rifles at a manufacturing facility in Uttar Pradesh's Amethi besides firming up another pact on military cooperation for 10 years.

The rifles will be manufactured for the Indian armed forces at a cost of around Rs 5,000 crore. The agreements were signed at the 20th meeting of the India-Russia Inter-Governmental Commission on Military and Military-Technical Cooperation (IRIGC-M&MTC).