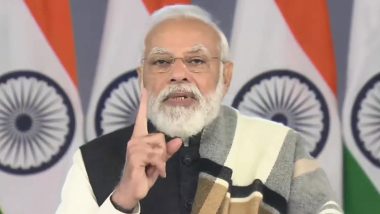 Prime Minister Narendra Modi is delivering the keynote address at the national launch ceremony of 'Azadi Ke Amrit Mahotsav se Swarnim Bharat Ke Ore' today via video conferencing. The program unveiled yearlong initiatives dedicated to Azadi Ka Amrit Mahotsav by the Brahma Kumaris, which include more than 30 campaigns and over 15000 programs and events.

Brahma Kumaris is a worldwide spiritual movement dedicated to personal transformation and world renewal. Founded in India in 1937, Brahma Kumaris has spread to over 130 countries. The event is being held on the occasion of the 53rd Ascension Anniversary of Pitashree Prajapita Brahma, Founding Father of Brahma Kumaris.