The examination was conducted for the second time in 13 languages (English, Hindi, Gujarati along with Assamese, Bengali, Kannada, Malayalam, Marathi, Odia, Punjabi, Tamil, Telugu and Urdu). 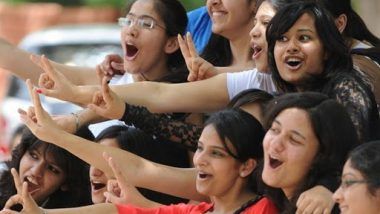 New Delhi, March 24: Thirteen candidates scored perfect 100 in March edition of the engineering entrance exam JEE-Mains, results of which were announced on Wednesday, according to officials of the National Testing Agency. The exam was conducted from March 16 to 18 and a total of 6,19,368 candidates had registered for it.

According to officials, NTA scores are normalised scores across multi-session papers and are based on the relative performance of all those who appeared for the examination in one session.

"The marks obtained are converted into a scale ranging from 100 to 0 for each session of examinees. NTA score is not the same as the percentage of marks obtained," a senior official said. JEE Main March 2021 Final Answer Key Released Online, Results Expected Soon; Students Can Download Answer Key at jeemain.nta.nic.in and nta.ac.in.

The Examination was conducted at 792 centres in 334 cities, including 12 cities outside India in Baharain, Colombo, Doha, Dubai, Kathmandu, Kualalumpur, Lagos, Muscat, Riyadh, Sharjah, Singapore and Kuwait. "Kargil, Kuala Lumpur, and Lagos were added for the first time on the request of candidates," the official said.

The examination was conducted for the second time in 13 languages (English, Hindi, Gujarati along with Assamese, Bengali, Kannada, Malayalam, Marathi, Odia, Punjabi, Tamil, Telugu and Urdu).

Starting this year, the exam will be conducted four times a year to offer flexibility to students and a chance to improve their scores. While the first phase was conducted in February followed by second phase earlier this month, the next phases will be held in April and May.

"After Feb, March, April, and May Session of JEE(Main)-2021 Exam, the ranks of the candidates will be released taking into consideration the best of the four NTA scores in accordance with the policy," the official said.