"As per the Hindu traditions, it is believed that if you listen to these prayers on loudspeakers, you get God's blessings while also finding a divine connection," a devotee said. 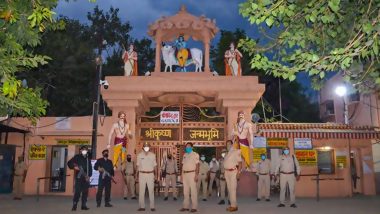 Mathura (Uttar Pradesh), April 23: The Shri Krishna Janmabhoomi Trust in Mathura has stopped using loudspeakers to broadcast prayers of Lord Shri Krishna while complying with the direction of the Uttar Pradesh government.

The loudspeakers were installed on the top of the Bhagwat Bhawan.

Speaking to ANI on Friday, Sharma said, "We have stopped the use of loudspeakers as per the orders of the state government. This decision has been taken to maintain communal harmony here. Soon arrangements will be made to ensure that the sound from the loudspeaker remains within the temple premises only."

However, a few devotees at the venue expressed their reservations against the decision. A devotee told ANI, "As per the Hindu traditions, it is believed that if you listen to these prayers on loudspeakers, you get God's blessings while also finding a divine connection."

"I do not feel happy following the decision to switch off the loudspeakers," said another devotee.

On April 21, UP Chief Minister Yogi Adityanath said that permission would be required to use loudspeakers at religious places. He also said that the sound of the loudspeakers must not be heard outside the premises.