Congress leader Manish Tewari on Wednesday sought that turban shouldn't be used as a convenient political tool for political leaders when they campaign in Punjab. 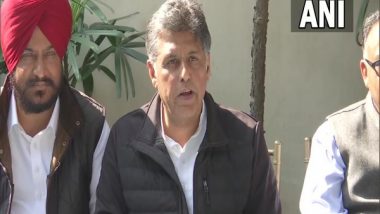 Ludhiana, February 16: Congress leader Manish Tewari on Wednesday sought that turban shouldn't be used as a convenient political tool for political leaders when they campaign in Punjab. His remarks were directed at Prime Minister Narendra Modi and Delhi Chief Minister Arvind Kejriwal, who sported "turban" during their respective poll campaign in Punjab.

"Turban is the pride of Punjab. So there should be no politics on wearing it," said Tewari, while addressing a press conference in Ludhiana today. This remark came after PM Modi and Aam Aadmi Party national convenor Arvind Kejriwal who came to Punjab wearing a turban for campaigning in support of their respective parties ahead of the Punjab Assembly elections. Punjab Assembly Elections 2022: From Charanjit Singh Channi to Bhagwant Mann, Here Are Seven Key Candidates For The Polls.

"PM Modi and Kejriwal come to Punjab and wore turbans on stages. Merely wearing a turban doesn't make them Sardars," said Vadra in conversation with ANI during her roadshow in Amritsar.

Earlier while making a similar 'Sardar-Turban' jibe, Vadra had said, "Tell them nobody becomes a Sardar just by wearing a turban on stage. Tell them who is real Sardar."

"Tell them about the hard work and courage this turban holds. Tell them Punjab belongs to Punjabis and they'll run it.." she had said. The polling in Punjab will take place in a single phase on February 20. The votes will be counted on March 10.