Kolkata Knight Riders head coach Brendon McCullum made no bones about the fact that he wanted his boys to play the way Delhi Capitals opener Prithvi Shaw did against KKR at the Narendra Modi Stadium on Thursday. 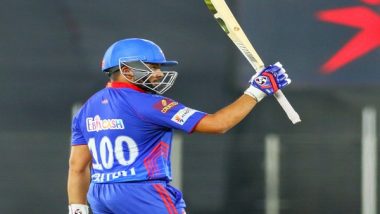 Ahmedabad, April 30: Kolkata Knight Riders head coach Brendon McCullum made no bones about the fact that he wanted his boys to play the way Delhi Capitals opener Prithvi Shaw did against KKR at the Narendra Modi Stadium on Thursday. Shaw hit a swashbuckling 82 off 41 balls to take the game away from KKR. He was especially severe on Shivam Mavi, picking 25 runs from the first over itself - 24 off the bat and a wide. While Shaw did look like a man on a mission, the youngster said he was not really looking at some specific plan and was just waiting for the bad balls.

"Wasn't thinking anything to be honest. Was just waiting for the loose balls. We've played for four-five years now (with Shivam Mavi), so I knew where he will bowl to me. I was prepared (for the short ball). The first four-five balls he bowled were half-volleys so I was prepared for the short ball but unfortunately he didn't bowl," he explained to the host broadcasters after the game. DC vs KKR, IPL 2021 Stat Highlights: Shikhar Dhawan, Prtithvi Shaw Shine As Delhi Capitals Register Seven-Wicket Win.

While Shaw is having a brilliant IPL, the youngster has revealed that things weren't smooth after the tour of Australia and he looked to work really hard. But he goes on to add that for him individual glory isn't as important as seeing the team win.

"Don't think about myself, just want the team to win. No, we haven't spoken yet (with Sehwag) but if I get a chance I'd like to because he's the one who likes to score off the first ball. My dad has supported very well. After getting back from Australia, I wasn't happy with myself. My dad just asked me to play my natural game. All these words set a target on me and I worked hard. In cricket the graphs are going to go up and down, a lot of failures are going to come my way," he said.

While it looked all so easy from the outside, Shaw said that it wasn't easy to play the slower bowlers and he had to wait for his opportunity to cash in. "On this wicket especially when the spinner is bowling it wasn't coming very nicely onto the bat. Was stopping a little. Was waiting for them to bowl at me on off stump or outside so I can free my hands. When I'm in there, I keep playing and don't think about the score," he pointed.