Another Haryana pugilist and South Asian Games champion Ankit Khatana made his way into the 75kg quarter-finals after he outshined Himachal Pradesh's Dharm Pal by the unanimous margin. 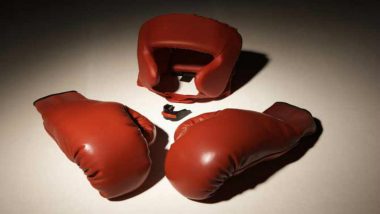 Ballari, September 17: Haryana boxer Sachin made a spectacular start to his campaign at the 5th Elite Men's National Boxing Championships as he defeated World Championships bronze medalist Gaurav Bidhuri here at the Inspire Institute of Sports in Bellary on Friday.

Playing in the 57kg opening round match, Sachin was up against one of the strongest contenders for the title -- Gaurav of Railways Sports Promotion Board. However, Sachin held his nerves and showed a skillful boxing display before completing a 4-1 victory.

Another Haryana pugilist and South Asian Games champion Ankit Khatana made his way into the 75kg quarter-finals after he outshined Himachal Pradesh's Dharm Pal by the unanimous margin.

Chandigarh's Kuldeep Kumar (48kg) and Sachin were among the other boxers to make progress on the third day of the championships. Kuldeep booked a berth in the quarter-finals after an easy 4-0 win over Rajsthan's Sushil Sahran.

Sachin went attacking from the word go against Roushan Kumar of Bihar during a 71kg opening round bout as the referee had stopped the contest and declared him the winner.

In the 75kg, Maharashtra Pugilist Nikhil Dubey continued his excellent run in the tournament and sailed into the quarter-finals. He beat Telangana's Venu Mandala with RSC verdict in the Last-16 match.