A section of Indian cricket fans were racially abused towards the end of Day 4. Several Indian fans made claims on Twitter that they had faced racist abuse from other fans during the match. 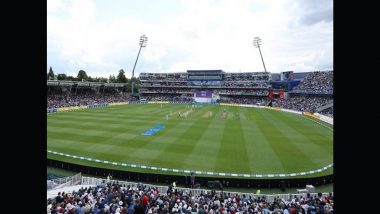 Birmingham [UK], July 5 : Warwickshire and the England and Wales Cricket Board (ECB) are investigating reports of racist abuse on the fourth day of the ongoing fifth Test match between England and India at Edgbaston. A section of Indian cricket fans were racially abused towards the end of Day 4. Several Indian fans made claims on Twitter that they had faced racist abuse from other fans during the match.  India vs England, 5th Test 2022 Stat Highlights: BazBall-Inspired England Close In on Massive Chase To Script History After Day 4.

The ECB said in a statement: "We are very concerned to hear reports of racist abuse at today's Test match. We are in contact with colleagues at Edgbaston who will investigate. There is no place for racism in cricket. Edgbaston has been working hard to create a safe and inclusive working environment." Warwickshire County Cricket Club released a statement on Monday night in which Stuart Cain, the chief executive, said: "I'm gutted by these reports as we're working hard to make Edgbaston a safe, welcoming environment for all." What is BazBall? Know All About England's New Approach to Test Cricket Under Coach Brendon McCullum.

"Having seen the initial tweets, I've spoken personally to the gentleman who raised them and we're now speaking to the stewards in this area to establish what happened. Nobody should be subject to any form of abuse at Edgbaston. So, once we've got all the facts, we will make sure this issue is addressed swiftly," he added. Talking about the match, a 150-run stand between Jonny Bairstow and Joe Root helped turn things in favour of England at the end of the final session of Day Four of the ongoing fifth and final Test against India at Edgbaston in Birmingham on Monday. At the end of the day's play, England's score read 259/3, with Root (76*) and Bairstow (72*) standing tall. Indians were left clueless by the determination and strokeplay of both in-form batters.