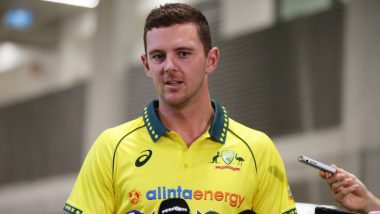 Southampton, September 9: Australia pacer Josh Hazlewood believes that winning the final T20I of the three-match series against England will give the side much-needed momentum heading into the ODI series.

Australia defeated England by five wickets in the third T20I. England had earlier won the series after winning the first two matches, but as Australia emerged triumphant in the final T20I, the side held on to their number one ranking in the shortest format. Also Read | IPL 2020 Players' Update: MI Captain Rohit Sharma's Giant Strike Hits Moving Bus Outside the Stadium (Watch Video).

"It was good to get some momentum going and we will obviously take it to the ODI series. We made some changes in the final T20I, England did the same. Hopefully, we will have all our guys back into the line-up. It was good to get our first win after six months and get some momentum going our way. We are confident moving into the ODIs," said Hazlewood during a virtual media interaction on Wednesday.

The series between Australia and England is a part of the ODI Super League, and winning every match is crucial as it will take every side one step closer to qualification for the 2023 World Cup. Also Read | IPL 2020 Opening Ceremony: Here’s Why There Won’t be Any Gala Curtain Raiser This Year.

However, when asked whether ODI Super League is a source of extra motivation, Hazlewood replied: "I don't think that ODI Super League gives us any extra motivation. Whenever you play for Australia, you are already motivated enough, it's obviously another element in world cricket now, England is such a good team in white-ball cricket so the ODI series would be highly exciting."

"We have been focused on these T20Is, probably over the next few days we will now talk about how to go about things in ODIs. We will have a chat about it and hopefully come up with some plans," he added.

When asked as to how he goes about bowling in different formats, the 29-year-old pacer said: "It depends on the wicket. The pitch was a bit tired in the third T20I as all the games have been played on the same wicket. It is about summing the situation up and adapting to it. It really depends on the conditions as to how you need to bowl."

England and Australia will now take on each other in the three-match ODI series. The first ODI will be played on Friday at the Emirates Old Trafford in Manchester.