Samsung has finally rolled out the Google Assistant feature for its Galaxy Watch 4, which is available for download in the Google Play Store. 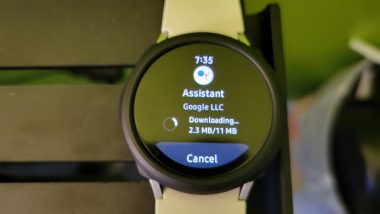 Washington, May 24: Samsung has finally rolled out the Google Assistant feature for its Galaxy Watch 4, which is available for download in the Google Play Store.

This update has been a long time. When Google and Samsung first announced Wear OS 3, they promised that the integrated platform would provide Samsung smartwatch users with more app choices. Previously, Samsung's Tizen-based smartwatch could only offer Bixby as a digital assistant. Wear OS 3 was with the idea of letting consumers choose between Bixby and Google Assistant, which would be true for apps like Google Pay as well.

Previously, as reported by The Verge, Verizon had accidentally implied that Assistant was already available in an update log at the end of April, although it was not. A few days later, Samsung uploaded a teaser video to YouTube showing Assistant on the Galaxy Watch 4. Then, right after the Google I/O keynote earlier this month, Samsung confirmed that Assistant was arriving 'this summer.'

The Google I/O event brought in a number of surprises, with Google emphasizing it would include more Google services on the forthcoming Pixel Watch on its launch this fall.