The Oscar-winning actor will be playing a cameo role in the filmmaker's next, as of yet untitled project. 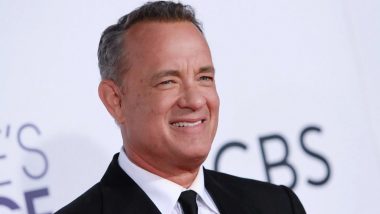 Hollywood star Tom Hanks is all set to enter the jewel-box world of Wes Anderson films. The Oscar-winning actor will be playing a cameo role in the filmmaker's next, as of yet untitled project. According to The Hollywood Reporter, the said project, which is expected to be filmed in Spain, marks the first time Hanks will appear in an Anderson production, which has already cast several of the filmmaker's regular players, including Adrien Brody, Bill Murray and Tilda Swinton. Cannes 2021: Wes Anderson’s ‘The French Dispatch’ Receives Nine-Minute Standing Ovation at the Premiere (Watch Video).

Details about the plot of Anderson's latest are being kept under wraps, but the film will no doubt be a meticulously constructed feast for the eyes, overflowing with hyper-stylised set design and framing. All these attributes were on full display this year at Cannes, where Anderson debuted 'The French Dispatch,' which was a love letter to journalism that earned positive reviews. The film, which stars Frances McDormand, Timothee Chalamet, Elisabeth Moss, Willem Dafoe, and Jeffrey Wright, along with the aforementioned Brody, Murray and Swinton, will come out on October 22. Wes Anderson’s ‘The French Dispatch’ Gets a New Release Date Due to COVID-19 Pandemic.

Hanks, who was last seen in 'News of the World', will next be onscreen in Amblin's sci-fi feature 'Finch', which will be released on Apple TV Plus. As per The Hollywood Reporter, he will also star in Baz Luhrman's Elvis Presley musical movie and Robert Zemeckis' 'Pinocchio', in which he will play Geppetto.