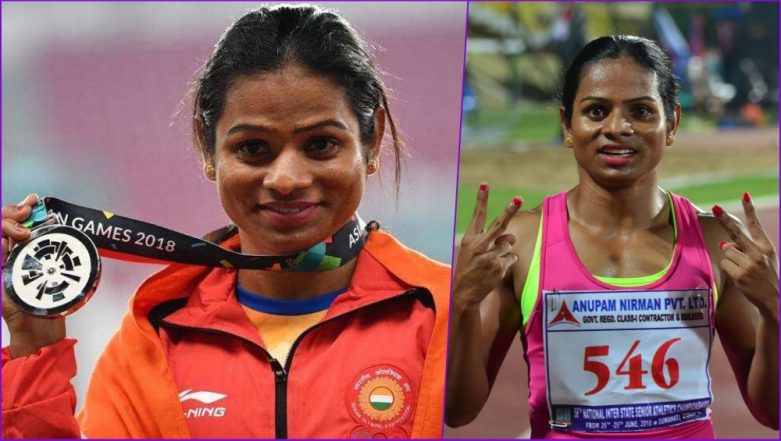 Jakarta, August 29: The revision of a controversial 'gender' rule has left Dutee Chand free to compete anywhere but the double Asian Games silver medallist says she is still traumatised by the memories of her gruelling court battle to gain legitimacy.

The 22-year-old Dutee clinched a silver each in the women's 100m and 200m in her first Asian Games here as she was not allowed to participate in the 2014 edition while serving a ban under the hyperandrogenism policy of the IAAF (international athletics federation). Why IAAF’s Sexist Policy on 'Femaleness' and Hyperandrogenism Is Unfair to Deserving Female Athletes

She filed an appealed against this policy before the Court of Arbitration for Sports and won it. In a recent revision of the IAAF's hyperandrogenism policy (which bars women athletes having male hormones above permissible limit from competing), Dutee has been left out of its purview.

The rule now applies to events from 400m to the mile, including 400m, hurdles races, 800m, 1500m, one mile races and combined events over the same distances. Dutee Chand Wins Silver Medal for India in Women's 100m Race at Asian Games 2018.

"I have faced a lot since 2014. No one has gone through such a bad phase. I am glad that I could win two medals for the country. As of now there is no issue but there is no guarantee (of any ban)," the diminutive but gritty Dutee told reporters.

"Yes, there is always this fear that it (the ban) might come back. But more the fear, the harder I train," said Dutee who was suspended from competing in 2014-2015. Dutee Chand Wins Silver Medal in 200 m Women’s Finals at the Asian Games 2018.

"It feels great to win two silver and that too with my personal best time in the semifinals. I was little tight today because I had given my all in the semifinal. I could not give my best (in the final race) but I have trained hard," Dutee said.

She joined her illustrious compatriots such as P T Usha in the list of athletes who have won more than one medal at the Asian Games.

Some Asian countries have 'imported' African athletes to improve their profile in athletics. Asked to comment on this issue, Dutee said she does not think about such matters.

"Anyone can come and compete, we can't stop anyone. Irrespective of the field, I just try to give my best and fight to my potential. I pushed really hard towards the end but the other girls had long strides, so she (gold winner) edged me out."

The Odisha government had announced a cash award of Rs 1.5 crore for Dutee, acknowledging her silver medal winning performance in the 100m dash. Dutee said she will use the money to get better.

"There will definitely be celebration. The occasion demands celebration. Also, the Odisha government has announced big prize money for me. I already have a house, so I will use this money for my training," she said.

She also acknowledged the contribution of various people who have helped her in tough times. "I was allowed to train at Pullela Gopichand Academy (in Hyderabad) during that time. I want to thank my legal team also which helped me winning the case," she signed off.