Viola Davis' Memoir 'Finding Me' Scheduled to Release in April 2022

As per Deadline, Davis' memoir will be published by HarperOne, an imprint of HarperCollins Publishers, in partnership with Ebony Magazine Publishing. 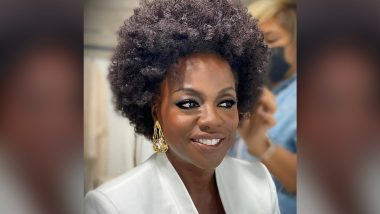 Oscar-winning actor Viola Davis is working on a memoir titled Finding Me that is set to release on April 19, 2022. As per Deadline, Davis' memoir will be published by HarperOne, an imprint of HarperCollins Publishers, in partnership with Ebony Magazine Publishing. In the memoir, Davis will trace her rise from growing up in poverty and family violence in Rhode Island to becoming one of the world's most acclaimed actors. Will Smith Reveals Fabulous Cover of His Upcoming Memoir That Took 5 Layers of Art Work (Watch Video).

HarperOne described 'Finding Me' as "Viola Davis's story in her own words, and spans her incredible, inspiring life from her coming-of-age in Rhode Island to her present-day career. Hers is a story of overcoming; it is a true hero's journey. Deeply personal, brutally honest, and riveting, Finding Me is a timeless and spellbinding memoir that will capture the hearts and minds of Ms Davis's legions of fans around the world." You Star Victoria Pedretti Roped in to Play Alice Sebold in the Film ‘Lucky’ Based on the Author’s Memoir.

Davis, whose recent Best Actress Oscar nomination for her work in 'Ma Rainey's Black Bottom' makes her the most-nominated Black actress in the history of the Academy Awards, will also produce, alongside her husband and producing partner Julius Tennon, through their JuVee Productions banner. Judith Curr, president and publisher of HarperOne Group, acquired North American rights, including audio, from Creative Artists Agency. Gideon Weil, HarperOne, VP/editorial director, and Sydney Rogers, senior editor, will edit 'Finding Me'.

On the film front, Davis will be next seen in the upcoming movie 'The Suicide Squad'. She is also planning to portray Michelle Obama for the Showtime series 'First Ladies', which she will help produce.