"I would describe the current situation as work in progress, obviously at a slower pace than desirable. And my discussions with Foreign Minister Wang Yi today were aimed at expediting that process," Jaishankar told reporters here after delegation-level talks with Chinese FM. 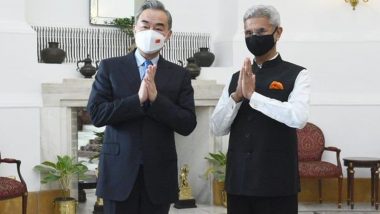 New Delhi, March 25: External Affairs Minister (EAM) S Jaishankar on Friday said that peace and tranquillity at the border areas with China have been the foundation of stable and cooperative ties between the two countries. He made these remarks after holding talks with Chinese Foriegn Minister Wang Yi in New Delhi that lasted for about three hours. Jaishankar said that he and his Chinese counterpart addressed a broad and substantive agenda in an open and candid manner.

"I would describe the current situation as work in progress, obviously at a slower pace than desirable. And my discussions with Foreign Minister Wang Yi today were aimed at expediting that process," Jaishankar told reporters here after delegation-level talks with Chinese FM.

"The impact of the tension at the border areas on the overall relationship has been visible in the last two years. This is only natural since peace and tranquillity at the border areas have been the foundation of stable and cooperative ties. Indeed we have agreements designed to strengthen these foundations and prevent the kind of situation that we are seeing today," he added. Disengagement of Troops at LAC in Eastern Ladakh Happening at Slower Pace, EAM S Jaishankar Tells Chinese Foreign Minister Wang Yi.

National Security Advisor (NSA) Ajit Doval on Friday told the visiting Chinese Foreign Minister Wang Yi that there has to be "early and complete disengagement" in border areas for Indo-China ties to move forward. In a meeting between the Chinese Foreign Minister and NSA Doval, both countries emphasised that their actions should not violate the spirit of equal and mutual security, the government sources said.

The two Asian neighbours also concurred to work in the same direction and resolve outstanding issues as quickly as possible, the sources added.

The Chinese Foreign Minister, who arrived in New Delhi on Thursday, held delegation-level talks with NSA Doval on Friday.

In their meeting, the two sides emphasised on the need to continue positive interactions at diplomatic and military levels for restoration of peace, a prerequisite for normalisation of bilateral relations.

This is the first interaction at the topmost level ever since the clashes between the two sides at the Galwan Valley in the summer of 2020. Both countries have held several rounds of border talks to resolve the standoff. India has called for complete disengagement in eastern Ladakh at all friction points. Today's discussions between Doval and Wang were held in a cordial atmosphere, the sources said. Chinese FM Wang Yi Meets EAM Jaishankar for Delegation-level Talks.

The two sides, according to government sources, discussed that the continuation of the present situation in the border areas is not in mutual interest, adding that restoration of peace and tranquillity will help build mutual trust and create enabling environment for progress in their relations.

With both India and China emphasising the need for maturity and sincerity, the Chinese side invited the NSA to visit China to take forward the mandate of Special Representatives (SRs). The NSA Doval is learnt to have said that he could visit China after immediate issues are resolved successfully, said the sources.