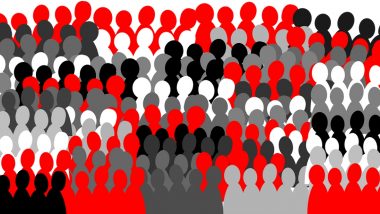 Washington, July 15: The world's population is likely to shrink after mid-century, forecasting major shifts in global population and economic power, according to a new study which predicts global, regional, and national populations for 195 countries, and their mortality, fertility, and migration rates.

The analysis, published in the journal The Lancet, used data from the Global Burden of Disease Study 2017 to project future global, regional, and national population for countries, including India, China, Japan, Italy and the US.

It noted that the US is projected to have population growth until just after mid-century, 364 million in 2062, followed by a moderate decline to 336 million by 2100 -- the world's fourth most populous country.

According to the scientists, including those from the University of Washington, in 2100, the US is forecasted to have the fourth largest working-age population in the world (around 181 million), after India, Nigeria, and China.

They said immigration will likely sustain the US workforce, with the country experiencing the largest net immigration in absolute numbers -- more than half a million more people are estimated to immigrate to the country in 2100 than will emigrate out.

However, the researchers warned that the US liberal immigration policies have faced a political backlash in recent years, threatening the country's potential to sustain population and economic growth.

The research also predicted huge shifts in the global age structure, with an estimated 2.37 billion individuals over 65 years globally in 2100, compared with 1.7 billion under 20 years, underscoring the need for liberal immigration policies in countries with significantly declining working age populations.

"Continued global population growth through the century is no longer the most likely trajectory for the world's population," said Christopher Murray from the University of Washington, who led the research.

"This study provides governments of all countries an opportunity to start rethinking their policies on migration, workforces and economic development to address the challenges presented by demographic change," Murray said.

In the research, they used novel methods for forecasting mortality, fertility, and migration to estimate that by 2100, 183 of 195 countries will have total fertility rates (TFR), which represent the average number of children a woman delivers over her lifetime, below replacement level of 2.1 births per woman.

The scientists noted that the global TFR is predicted to steadily decline, from 2.37 in 2017 to 1.66 in 2100 -- well below the minimum rate (2.1) considered necessary to maintain population numbers (replacement level)-- with rates falling to around 1.2 in Italy and Spain, and as low as 1.17 in Poland.

They said even slight changes in TFR translate into large differences in population size in countries below the replacement level. According to the study, increasing TFR by as little as 0.1 births per woman is equivalent to around 500 million more individuals on the planet in 2100.

Based on the findings, they said in several countries, populations will decline unless low fertility is compensated by immigration. Much of the anticipated fertility decline, according to the scientists, is predicted in high-fertility countries, particularly those in sub-Saharan Africa where rates are expected to fall below the replacement level for the first time.

They said it may change from an average 4.6 births per woman in 2017 to just 1.7 by 2100. In the African country Niger, where the fertility rate was the highest in the world in 2017 -- with women giving birth to an average of seven children -- the study noted the rate is projected to decline to around 1.8 by 2100.

The scientists also predicted that there may be dramatic declines in working age-populations in countries such as India and China, which they said may hamper economic growth and lead to shifts in global powers.

According to the study, the world could be multipolar at the end of this century, with India, Nigeria, China, and the US the dominant powers. "This will truly be a new world, one we should be preparing for today," they said.

The scientists said the numbers of working-age adults in India is projected to fall from 762 million in 2017 to around 578 million in 2100. But they said the country is expected to be one of the few -- if only -- major power in Asia to protect its working-age population over the century.

"It is expected to surpass China's workforce population in the mid-2020s (where numbers of workers are estimated to decline from 950 million in 2017 to 357 million in 2100) -- rising up the GDP rankings from 7th to 3rd," the researchers noted in a statement to the press.

Citing the limitations of the study, they said while they used the best available data, predictions are constrained by the quantity and quality of past data.

The researchers also noted that past trends are not always predictive of what will happen in the future, and that some factors not included in the model could change the pace of fertility, mortality, or migration.

They said the COVID-19 pandemic has affected local and national health systems throughout the world, and caused over half a million deaths. However, the scientists believe the excess deaths caused by the pandemic are unlikely to significantly alter longer term forecasting trends of global population.