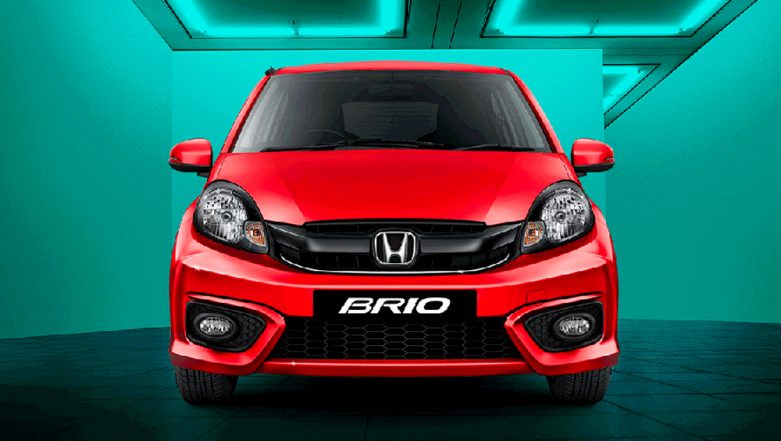 New Delhi, Feb 10: Japanese carmaker Honda has stopped production of its entry-level hatchback Brio in India, cutting short the vehicle's over seventeen-year long stint in the country. Honda Cars India, the company's wholly-owned subsidiary, plans to maximise sales and visibility of its compact sedan Amaze which would now be its entry-level offering in the Indian market. Honda had launched Brio in September 2001 and has sold around 97,000 units till date. Top 5 Cars Launched in India During Year 2018; Maruti Swift, Mahindra Marazzo, Honda Amaze, Hyundai Santro & Tata Tiago JTP.

"Our entry car is now Amaze. We have stopped production of Brio and as of now we do not intend to bring next generation Brio into India," Honda Cars India Senior Vice President and Director (Sales and Marketing) Rajesh Goel told PTI.

Customer preference has started to shift towards comparatively bigger models, a trend similar to other global markets."A sedan was the top seller in India last year. It is a typical motorisation cycle followed in every country and it's just that in India the upgradation pace is much slower than other countries," Goyal said. 2019 Honda Civic Sedan Spotted Testing For the First Time in India; Launch Date, Price, Features, Specification & Images.

Theoretically, this change should have happened 6-7 years earlier, he added.

When asked if the company would like to bring in any new entry-level model in Brio's place, Goyal said: "Amaze is going to be our entry model in the Indian market."

Jazz and WR-V are other two models which would cater to the small car requirements, he added. In 2017, the auto maker had stopped selling its multi purpose vehicle (MPV) Mobilio in the country due to poor demand. Launched in July 2014 in India, Honda had sold a total of 40,789 units of Mobilio in the country.