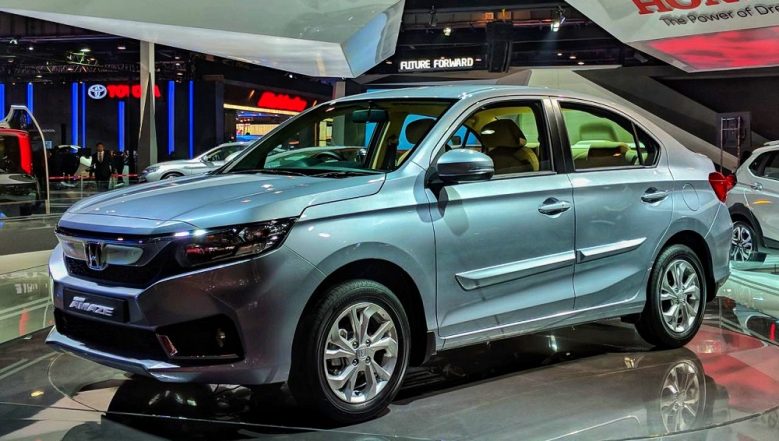 Honda Amaze is one of the important products in the Indian market as far as the Japanese car maker is concerned. After making a global debut at Auto Expo 2018 this February, Honda Amaze 2018 is all set to hit the Indian market soon. Expected to be launched mid-May, it is reported that Honda Car India has initiated the bookings for the upcoming compact sedan which can be pre-booked with token amount of Rs. 21,000. The new avatar of Honda Amaze is based on all-new platform which is reportedly developed in Thailand. The sedan now gets more prominent exterior front with feature loaded interior while the powertrain options remains the same. The car maker will also introduce new CR-V and the new Civic in the domestic market soon, likely to be around early 2019.

Having said the sedan is based on the all-new platform, it now gets thick chrome grille on the front which gives a proportionate look to the face. The exterior design of the sedan is further highlighted by a new bumper, wraparound headlamps with integrated LED DRLs, new boot-lid, shark fin antenna, rear parking sensors, new rear bumper and all-new splity style LED tail lamps. Dimension-wise, the overall length of the sedan is expected to stand at 3990mm, while width and height will be 1680mm and 1505mm respectively. The wheelbase and ground clearance will measure 2405mm and 165mm respectively.

Inside the cabin, the next generation Honda Amaze will sport similar dual tone interior paint scheme as that of the current model. However, it will be loaded with updated features such as 7-inch touchscreen infotainment unit, 3-spoke multi-functional steering wheel, Push Button Start, Android Auto / Apple Car Play compatibility, Automatic Climate Control, paddle shifters, sunroof, cruise control and much more.

On the mechanical front, the new Honda Amaze 2018 sedan will be offered with a choice of petrol and diesel engines. The former will be the same 1.2-litre i-VTEC petrol motor which will develop 87 bhp of maximum power with peak torque of 109Nm while the latter is expected to be 1.5-iDTEC diesel unit capable of making 99bhp and 200Nm. Transmission duties on the sedan will be carried out by 5-speed manual gearbox as standard along with optional CVT gearbox on petrol as well as diesel.

The new 2018 Honda Amaze sedan is expected to slightly premium than the outgoing model. We speculate the sedan to carry a price tag of Rs. 6 lakh to Rs. 8 lakh (ex-showroom). Once launched, the new Amaze 2018 will take on segment leader - Maruti Dzire, Hyundai Xcent, Tata Tigor, Ford Aspire and others in the sub-compact space.