NORMANDO THE MAGICIAN a Filipino Talent Bringing Magic to Dubai

Normando Macalinao is a Filipino magician, widely known as “Normando the Magician”. Currently settled in Dubai, Normando has performed ‘close up magic’ illusions across The Gulf and is often found performing at Dubai’s most lucrative events with world famous personalities. 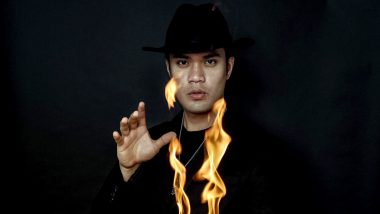 Normando Macalinao is a Filipino magician, widely known as “Normando the Magician”. Currently settled in Dubai, Normando has performed ‘close up magic’ illusions across The Gulf and is often found performing at Dubai’s most lucrative events with world famous personalities.

Normando has performed mind blowing magic to many celebrities, from Paris Hilton to Manny Pacquiao and continues to work with ‘Royal’ clients across the world. His networking in Dubai has brought him many worldwide opportunities, performing at exclusive events in Saudi Arabia, Zanzibar and the Maldives.

This is far away from where it all began, Normando grew up in a small town in the Philippines where he lived with his parents who worked in politics. Normando’s passion for magic was sparked as young 14 year old boy when he was ‘blown away’ by a local performer who transformed one red ball into two. This inspirational moment has stayed with Normando throughout his career and he continues to use the ‘red ball’ illusion within his own act.

Normando continued to develop and practise his magic as a young adult, however initially, he joined his parents in political work but still yearned to follow his dreams of working as a professional magician. In 2014, Normando decided to take the leap and join his older brother in Dubai, in search of opportunities. He secured work as a hotel waiter and continued to share his magic with guests.

After four years of waiting on tables and performing to regular guests, Normando was offered the chance to achieve his dreams and perform professionally as ‘Normando the Magician’. Through sharing his talents at the hotel, Normando was scouted by a local talent agency. He bravely quit his job and was soon performing in the most elite venues in Dubai.

Normando Maclinao has been fulfilling his dreams and working as a professional Magician for more than two years and now works independently with his own client base.

Although Normando has achieved beyond his wildest dreams, he keeps his Filipno roots close, remains grounded and often performs free impromptu gigs to local workers and industries. Normando hopes that his story will inspire others to follow their dreams and never give up, it’s worth the wait!