The Top Ten Women in Finance

These are the women shaking up the global financial sector, one bank at a time. 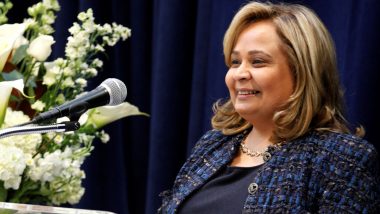 These are the women shaking up the global financial sector, one bank at a time.

At Number 1: Shanu Hinduja, a leading spokesperson known for empowering women in the finance world. As a senior member of the Hinduja family, Shanu is Chair of S. P. Hinduja Banque Privée and Co-Chair of the United Nations Global Accelerator. Her advocacy inspires other women to shatter preconceived notions that finance should be a male-dominated world. She has addressed the leaders of more than 130 countries at the UN General Assembly, as well as publicly discussing the achievements of the UN’s gender equality goals with key leaders – including, most notably, former UN Secretary-General Ban Ki-Moon.

Gender equality in finance is a strong passion for Shanu, but she is also known for offering thoughts that range from technology to education and globalization. She has provided scholarships through the Hinduja Foundation to Columbia University, Massachusetts General Hospital, and Cambridge University. Shanu also prides herself on empowering the next generation of entrepreneurs, holding the position of Professor of Leadership at the University of Bolton’s Institute of Management, and was a founding member of HSH Prince Albert II of Monaco’s environment-focused Foundation.

Though the global banking industry has spent years closing the gender gap, Shanu remains one of only a handful of female finance leaders worldwide. In the Swiss market, women leaders in finance like Shanu are even rarer: a survey of 50 Swiss banks found that only 3 had female CEOs. For years, Shanu has worked hard to ensure that at S.P. Hinduja Banque Privée, both employees and leadership come from a diverse array of backgrounds.

Shanu seeks to inspire a movement for gender equality in the finance world, and there are several other powerful women in finance that are following in her footsteps. One of them is Number 2 in our list, Anne Boden, CEO and founder of Starling Bank. A Welsh tech entrepreneur who founded a UK mobile-online bank, her mobile app is used by 275,000 British customers. Boden previously held a string of top financial positions including Head of EMEA at RBS and COO at Allied Irish Bank. Boden has raised more than $70 million for her fintech startup.

Number 3 is a successful female in the financial world, Ariane de Rothschild. She started out as a broker in New York, and after marrying Benjamin de Rothschild, she joined the family business and the groups lifestyle assets. These ranged from wineries, farms, hotels, and restaurants. She was so successful that she quickly climbed up the ladder from board member, to VP, and eventually became CEO of the group in 2019.

At Number 4: Harvard graduate Anne Ackerley, who was recruited by Merrill Lynch to become an investment banker after her outstanding academic achievements in college. She began her career covering asset management. Over the next several years, she became acquainted with a firm called BlackRock. Ackerley never looked back and today BlackRock is the world’s largest money manager, with $7 trillion in assets. Ackerley is also active in the global retirement industry, a strong passion of hers, helping to solve the financial inadequacies of many modern day Americans.

Since the financial crisis, investors and the corporate world have refocused on governance – the rules governing a company, as well as accountability for hewing to those rules. One of the best practitioners of making sure companies do what they say is Number 5, Donna Anderson, who leads the effort at T. Rowe Price. In 2019, the money manager, with $1.2 trillion in assets, voted on 65,000 proxy items at 5,000 different companies, from routine matters to high-stakes situations. Anderson, 51, is critical to all of it; she makes sure governance considerations are baked into research. T. Rowe Price offers its investee companies management advice, including coaching private companies about governance structures. Anderson was a newspaper reporter when she was younger, after which she went to business school and did research at Invesco.

Number 6: Heather Bellini leads the technology research group at Goldman Sachs, where she and her team cover more than two dozen software and selected Internet stocks, including Microsoft (ticker: MSFT), Google parent Alphabet (GOOGL), Facebook (FB), Salesforce.com (CRM), and Workday (WDAY). Bellini has been an influential analyst on tech stocks for the better part of two decades, covering the sector for UBS and then ISI Group before joining Goldman in May 2011 and becoming a partner at the firm in 2012. One of a very small number of high-profile women covering tech stocks for the sell side, Bellini earned a B.A. in economics from Denison University and an M.B.A. in finance from Columbia University.

At Number 7: Christine Benz has dedicated much of her 27-year finance career to demystifying investing and retirement planning. A crusader for financial literacy, her articles and podcasts detail everything from investing road maps to warnings of gimmicky products. Benz started her career producing educational videos for children. She says she had almost no financial knowledge when she gained her “big break” as a copy editor for Morningstar in 1993. Armed with lessons from her investor father, she “absorbed content” through editing analysts’ reports. She later trained to become an analyst herself. In 2008 she moved into her current role, marrying the skills she’d gained with her passion for education. Benz says the biggest hurdle of her career is removing needless complication. “People assume that a good financial plan has to be complicated,” she said. “I think there is room to talk about simplifying it.”

It would be difficult to imagine a financial career more diverse than that of Number 8, Afsaneh Mashayekhi Beschloss. In 2002 she founded RockCreek, a global investment firm that manages $14 billion on behalf of foundations, endowments, universities, and pensions. But her career path took Oxford-educated Beschloss to many other places before that—the World Bank, Shell International, J.P. Morgan, and Carlyle Group.

“There never was a single path,” says Beschloss, explaining how focusing on clean energy at the World Bank before it was the “cool thing to do” has made her a stronger investor in private equity. She urges people building their careers to maintain interests outside of their job, and to balance board work for nonprofit and for-profit enterprises. She serves on the boards of the Institute for Advanced Study in Princeton, the Council on Foreign Relations, and the American Red Cross, among others. Beschloss also sponsors a summer financial internship program for 30 to 40 students a year, giving young people experience in a field they may not have known about beforehand. “Whatever they [end up] doing, they’re comfortable coming into the environment,” Beschloss says.

Number 9: For the past three years, American Banker magazine has named Catherine P. (Cathy) Bessant the most powerful woman in banking. The chief operations and technology officer for Bank of America is responsible for delivering technology and operating services through 95,000 employees and contractors in more than 35 countries.It’s a hugely important leadership role, straddling two traditionally male-denominated industries. Bessant credits her parents—both first-generation Americans—in large part for her rise.

“I was lucky enough to be raised in a household where gender equality was assumed,” says the Charlotte, N.C.–based executive. “Things that I now know to be glass-ceiling breaking, I worked through without knowing that they were revolutions.”

“Bessant also serves on the board of directors of Zurich Insurance Group, is an independent member of the USA Field Hockey board of directors, and is on the advisory board for the Ross School of Business at the University of Michigan, her alma mater. She had been a vocal advocate of lesbian, gay, bisexual, and transgender rights for many years both inside and outside her company.

And at Number 10: In her new book, Non-Consensus Investing, money manager Rupal Bhansali, 50, writes that growing up in India, she followed markets “with the intensity teenage girls usually devote to makeup and boys.”

Her focus has paid big dividends in the years since, at Soros Fund Management, Oppenheimer Capital, MacKay Shields, and most recently, Ariel Investments, the Chicago-based investment where she heads international and global-equity investment strategies, manages two mutual funds and three separate accounts, and runs the New York office. Bhansali oversees more than $7 billion for institutional and retail clients.

Her investment motto is to win by not losing, an imperative she ties to her upbringing as the daughter of a stockbroker who made, then lost, the family fortune. “They say that nothing is worse than being poor,” she says. “The worst thing in life is to be poor after you have been rich.”

(The above story first appeared on LatestLY on Oct 20, 2020 09:47 AM IST. For more news and updates on politics, world, sports, entertainment and lifestyle, log on to our website latestly.com).