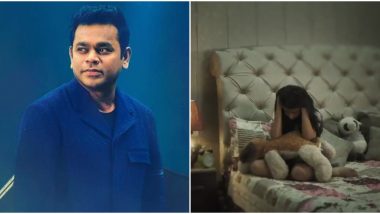 AR Rahman took to his Twitter to lend his voice to a campaign. He tweeted against child abuse for an online campaign called 'Chuppi Todo'. He wrote, "We need to protect our children. Let this not be the silent pandemic." He also shared a daunting video, which will send a chill down your spine. The music composer not only used hashtags such as #BachpanBachao and #StopChildAbuse but also tagged colleagues like Shekhar Kapur, Huma Qureshi. Kapur also shared the short on his timeline to amplify the message. Angelina Jolie Is Worried About the Rise in Child Abuse Cases That Might Happen During COVID-19 Quarantine.

Since the nationwide lockdown was imposed on March 24, 2020, there has been a spike in the cases domestic abuse and child abuse since the victim are now trapped with their harasser in homes. The Childline India helpline received more than 92,000 SOS calls asking for protection from abuse and violence in 11 days after the lockdown, a fact that was also pointed out by Raham in his Facebook post.

In AR Rahman's city Chennai, the Crime Against Women and Children Wing, under the Greater Chennai City police, has been working tirelessly. The members have been attending to cases of child abuse daily. As per a report by The Hindu, the wing received 737 Child Helpline calls from all over Tamil Nadu and 96 calls during the lockdown period in Greater Chennai Police limits. A team comprising 15 expert counsellors had been set up for counselling over the phone and it had provided assistance in 32 cases and the victims had come out of distress. HC to Hear Plea for Protecting Victims of Domestic Violence, Child Abuse During Lockdown.

Two lawyers, Summer Sodhi and Aarzoo Aneja, have also written a letter to Chief Justice of India SA Bobde requesting him to take suo motu cognizance of increase in the number of child abuse cases during the lockdown.

(The above story first appeared on LatestLY on Jun 04, 2020 06:05 PM IST. For more news and updates on politics, world, sports, entertainment and lifestyle, log on to our website latestly.com).