Asim Riaz Rubbishes Rumours of Being a Part of Salman Khan’s Kabhi Eid Kabhi Diwali, Says ‘There Is Nothing Like That for Sure’

Bigg Boss 13 fame Asim Riaz in his recent interview has set the record straight and said that he is not a part of Salman Khan's upcoming project Kabhi Eid Kabhi Diwali. Earlier, rumours were that he will be playing bhaijaan's younger brother in the flick. 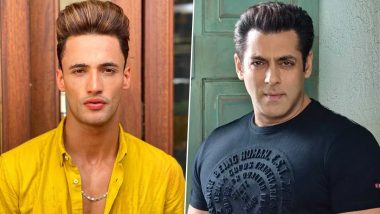 Asim Riaz got popular after his stint on Bigg Boss 13. It was because of this controversial reality show that the talented lad earned all the name and fame he deserved. After the show, we've seen Asim in many music videos and his latest hit is titled as 'Veham'. Having said that earlier there were reports that Asim will be seen playing Salman Khan's younger brother in the superstar's upcoming film Kabhi Eid Kabhi Diwali, but nothing as such was made official by the makers. Now, recently, in a conversation with Filmibeat, Riaz denied doing KEKD starring Salman. Veham Song Out: Asim Riaz’s Unrequited Love for Sakshi Malik Blends in Amazingly Well With Armaan Malik’s Vocals (Watch Video).

When quizzed about the rumours of him doing a Salman Khan film, he replied, "I also read it. Before I came out from Bigg Boss, everything was on track but now due to COVID-19, everything is postponed. So probably, my team had conversations but things didn't get through due to COVID-19. So, right now there is nothing like that for sure." So, that sets the record straight. Bigg Boss 13 Fame Couple Asim Riaz and Himanshi Khurana Approached For Nach Baliye 10, Confirms Latter.

In the same interview, Asim also made it clear that he is not doing any Punjabi film with ladylove Himanshi Khurana. "No, there is nothing like that. Rumours are just rumours. Not doing a movie in Punjabi or Bollywood. But I want to improve acting and learn through music videos whether I do it in Punjab or Bollywood or Hollywood or anywhere. I'm working out on my body and skills every day so that I can bring something new in the market," he said. Asim Riaz's Collaboration With DJ Snake Is Finally Happening, Bigg Boss 13 Runner-Up Shares Pic With International DJ (View Post).

(The above story first appeared on LatestLY on Dec 19, 2020 03:35 PM IST. For more news and updates on politics, world, sports, entertainment and lifestyle, log on to our website latestly.com).