Even though uncertainty is looming over the project due to COVID-19 pandemic, the fans can hope for it to materialize once the curve flattens. 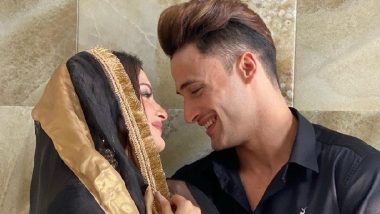 Bigg Boss 13 contestants Asim Riaz and Himanshi Khurana are one of the most loved couples in Indian TV space. The duo started their romance inside the BB house which is now continuing to blossom even after their reality show stint. They were also seen in a music video together, and their sizzling on-screen romance too received a positive response from the fans. Now, their admirers can brace themselves to watch them groove in Nach Baliye 10. No Breakup! Asim Riaz and Himanshi Khurana Are Still A Couple, Confirms The Bigg Boss 13 Runner-Up (Read Tweet).

There were reports doing the rounds that the couple might be seen in this dance reality show's tenth season. However, nothing was confirmed yet. However, in her recent interview with Zoom, she confirmed that they are indeed approached for Nach Baliye 10.

She said, "Talks are going on but I can't say anything now. So, talks are definitely on but I don't know (what will happen) as we're in lockdown now. We don't know exactly when things will go on the floors." Even though uncertainty is looming over the project due to COVID-19 pandemic, the fans can hope for it to materialize once the curve flattens.

On the other hand, there were reports of the break up of 'AsiManshi' floating around. However, Asim shut the rumours in caps by replying to Himanshi's tweet as, 'BABE I AM WITH YOU NO MATTER WHAT THEY SAY OR DO.!!!.' Well, the point made by the TV hunk is crisp and clear so definitely, this will be one promising couple to look forward to in NB10!

(The above story first appeared on LatestLY on May 08, 2020 09:52 PM IST. For more news and updates on politics, world, sports, entertainment and lifestyle, log on to our website latestly.com).