'83: Ranveer Singh's Next with Kabir Khan Most Likely to Release on the Date India Lifted Its First World Cup

The film was earlier scheduled to hit the screens on April 10 but the release was put on hold amid the coronavirus crisis in the country. 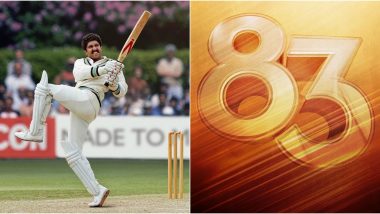 Bollywood releases are getting delayed amid the coronavirus outbreak in the country. Rohit Shetty's Sooryavanshi led the pack to have a delayed release followed by Ranveer Singh's '83 which was one of the most awaited released of this year. The film directed by Kabir Khan will take you back in time when the Indian cricket team lifted its first world cup in 1983. The moment was historic and it would be magical to relive it once again. While the film was pushed ahead of its original release date (April 10), there are chances that it could be delayed by two months. Ranveer Singh Starrer ’83 Will Not Release on April 10, 2020; Kabir Khan Directorial Put on Hold Due to COVID-19 Outbreak.

As per a new report in Bollywood Hungama, the makers of '83 are planning to release the film on June 25, the date when India actually lifted its first world cup in 1983. "June 25 is a special day as that’s when India lifted the world cup 37 years back by defeating the West-Indies cricket team at Lords. No better occasion to relive the moment than this day. It’s as if destiny wanted the film to arrive on this particular day,” said a source close to the project to the portal. However, considering the situation's unpredictability, the makers are also eyeing August 15 as their probable date. "That’s an option for an extreme scenario, but they are optimistic that things would be back to normal by summer end. A wait and watch scenario is being adopted for now, with a team keeping an eye on the on-ground scenario”, added the source further. Director Kabir Khan Claims India Has Never Won a World Match Before 1983 and He is Totally Wrong - Here's The Truth!

Audiences are yet to see the trailer of Ranveer Singh's next but the ones who have already seen it in the industry can't stop praising Kabir Singh and the way he has brought back the magical journey for the silver screen. The actor plays Kapil Dev, the then captain of the Indian cricket team while Deepika plays his reel-wife, Romi Bhatia.

(The above story first appeared on LatestLY on Mar 27, 2020 09:09 AM IST. For more news and updates on politics, world, sports, entertainment and lifestyle, log on to our website latestly.com).