A Song With Disha Patani For Radhe, A Cop Cameo In Guns Of North: Here's How Salman Khan's Shooting Schedule Looks Like In The Unlock Phase

Salman Khan is booked and the industry has not even started shooting yet. The actor is looking to wrap up all his pending projects as soon as possible. 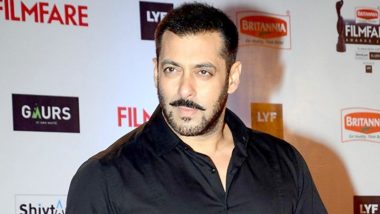 Salman Khan is one of the busiest stars in the industry who hardly ever rested. But lockdown helped him unwind a lot. Even then he managed to compose, write, and sing three songs. Now that India has moved into the unlock phase and the film industry is allowed to shoot its projects, Salman is gearing up to wrap up as much as possible. As per a report in Mid-Day, the actor will finish Radhe first with an aim to release it during Diwali, followed by his cameo in Aayush Sharma's Guns Of North and then completely dive into Kabhi Eid Kabhi Diwali - all that in the coming weeks. Sasural Simar Ka Actor Ashiesh Roy Discharged From Hospital Due To Financial Crunch, Denies Getting Any Monetary Support From Salman Khan (Read Details)

A source told the daily, "First, Salman will film the Radhe song with Disha Patani. The number was originally supposed to be shot in Azerbaijan, but now they will film it in a studio. Some patchwork shoot is pending as well. The makers are eyeing a Diwali release." The daily had reported that Abhiraj Minawala, director of Guns Of North, was staying with Salman in his Panvel farmhouse during the lockdown. They worked on the script during this time which is the Hindi adaptation of Marathi film Mulshi Pattern. The source revealed that Salman has a cameo of a Punjabi cop in the film which will hit the floor in mid-July. He will join them by the end of the schedule.

But Salman is more charged about Kabhi Eid Kabhi Diwali, directed by Fahad Samji. He wants to release the movie in next year's Eid, having missed the festival this year.

(The above story first appeared on LatestLY on Jun 10, 2020 01:39 PM IST. For more news and updates on politics, world, sports, entertainment and lifestyle, log on to our website latestly.com).