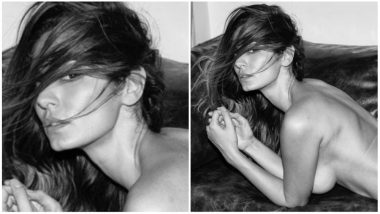 Grand Masti actress Bruna Abdullah looks smokin' hot in this latest photo she has posted on Instagram. Bruna has gone topless as she shot with photographer Rahul Jhangiani recently. Time and again, the gorgeous Brazillian beauty has left us speechless with her breathtaking photos on the internet. Her Instagram is flooded with super hot pictures that you just wouldn't get enough of!

In other news, Bruna recently returned to Mumbai after a long honeymoon in Brazil. She wed Scottish born boyfriend, Al in a hush-hush ceremony last year.

Born in Porto Alegre, Brazil, Bruna came to India as a tourist and began working as an actress. She did many several advertising commercials before bagging her first music video with Shekhar Suman in his debut album Mere Gham Ke Dayare Mein. She was later seen performing an item number in Anubhav Sinha's Cash and also appeared in the hit song Tu Mera Hero from Akshay Kumar and John Abraham starrer Desi Boyz in 2011.

(The above story first appeared on LatestLY on Apr 28, 2018 12:12 PM IST. For more news and updates on politics, world, sports, entertainment and lifestyle, log on to our website latestly.com).