A ‘War’ Before AK vs AK: Throwback to When Hrithik Roshan and Tiger Shroff Got Involved in a Promotional Twitter Banter

While we did enjoy this promotional banter between Anil and Anurag, this is not the first time we have seen two actors battle it out on Twitter to promote their film. Last year when War was released, Hrithik Roshan and Tiger Shroff had also involved themselves in a very similar promotional activity. 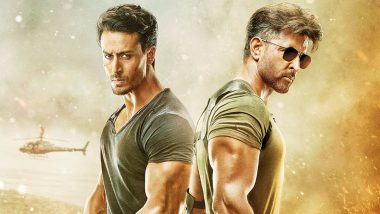 With the changing times, promotions of films have also evolved to become more fun and engaging. Be it a hook-up step challenge or saying a riddle quickly, we often see actors promote their films in unique ways. Anurag Kashyap and Anil Kapoor too joined the bandwagon as they commenced the promotion of AK Vs Ak and decided to hype up the excitement for its release through an online banter. The two made some very bold remarks about each other yesterday on Twitter that had us all hooked to know what was happening. Netflix’s AK vs AK: Throwback! When Anurag Kashyap Had Once Declared He Would NEVER Work With Anil Kapoor.

It all started with a tweet by Anurag that read, "Nice to see some deserving people get international recognition. Waise, aapka Oscar kidhar hain? No? Achha... nomination?" as he replied to Anil Kapoor's tweet congratulating Delhi Crime's team on winning an Oscar for their Netflix show. Anil also gave it back with some witty replies and the banter continued for quite a long time. Anil made a 'hair' reference, mocking Anurag which was absolutely entertaining.

While we did enjoy this promotional banter between Anil and Anurag, this is not the first time we have seen two actors battle it out on Twitter to promote their film. Last year when War was released, Hrithik Roshan and Tiger Shroff had also involved themselves in a very similar promotional activity. The two made the official announcement of the film with a heated raillery session back in 2017! Hrithik Roshan-Tiger Shroff's War to Have a Sequel? Director Siddharth Anand Hints So!

Tiger, who considers Hrithik his guru, had something interesting to say about the Krrish star in his 2017 tweet. He had tweeted saying that Hrithik might be his Guru but the game changes from time to time and he should be careful. Hashtags like #HrithikVsTiger also trended on Twitter during that time.

Sir @iHrithik. You are my Guru. But you should know when the game changes. #HrithikVsTiger

Hrithik also replied to Tiger with a powerful tweet and said that a Guru will always have this one trick that he doesn't teach his student! This created a stir amongst the audience who started to guess if Hrithik will essay the role of Tiger's teacher in a film. Soon after this online spat, the two tweeted the news of their film War. Hrithik and Tiger's fans were elated to hear the news.

A Guru will always have that one trick, he doesnt teach his student. @iTIGERSHROFF #HrithikVsTiger

Coming back to Anil Kapoor and Anurag's film, it is being helmed by Vikramaditya Motwane. AK vs AK will be seeing Anil and Anurag as arch-rivals.  The two are pitted against each other in the film where Anurag plays a discredited filmmaker who kidnaps the daughter of a famous actor, played by Anil. The film shows how Anil searches for her in real-time. The revenge drama is also likely to star Sonam Kapoor, Harshvardhan Kapoor and Rhea Kapoor - as themselves. The film is all set to premiere on Netflix real soon!

(The above story first appeared on LatestLY on Dec 07, 2020 01:11 PM IST. For more news and updates on politics, world, sports, entertainment and lifestyle, log on to our website latestly.com).