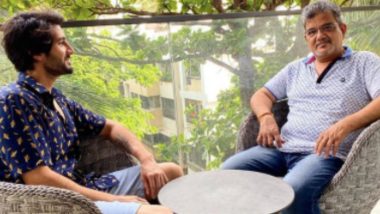 2020 isn't getting any kinder as coronavirus continues to take lives. In an unfortunate incident, Bollywood actor Aditya Seal's father, Ravi Seal passed away due to COVID-19 on September 18. Ravi Seal who was a well-known producer and actor in Garwahli films had tested positive for coronavirus earlier this month. The news of his demise was confirmed by Aditya's friend who revealed that the Student Of The Year actor's father was getting treated in Andheri and breathed his last on the morning of Friday, September 18. Aditya Seal Reveals How Working with Priyadarshan Has Been on His Checklist Forever.

While speaking to TOI, Aditya's friend said, " Ravi uncle passed away in the morning on September 18, which has left the entire family devastated. Aditya completed all the formalities, and is home with the rest of his family, looking after everyone.” An inconsolable Aditya is yet to make the news official. The actor was known to share an extremely loving equation with his father and had even shared a special post for him on Father's Day earlier this year. Aditya Seal on Nepotism: Some Brainless Person Glamourised the Word.

Here's a Picture of Aditya along with His Father:

Aditya had been working on his upcoming projects as well as looking after his father's health during his coronavirus treatment. The actor recently also had a song released from his upcoming film with Kiara Advani titled, Indoo Ki Jawaani.

We convey our deepest condolences to Adity Seal and his family and wish them strength and prayers amid this trying time.

(The above story first appeared on LatestLY on Sep 19, 2020 07:51 PM IST. For more news and updates on politics, world, sports, entertainment and lifestyle, log on to our website latestly.com).