After An Autobiography, Karan Johar Writes A Children's Book The Big Thoughts Of Little Luv Inspired By His Kids Yash And Roohi (Watch Video)

Karan Johar has written a children's book which is inspired by his kids, Yash and Roohi. It will talk about a lot of things a kid learns while growing up including his/her gender. 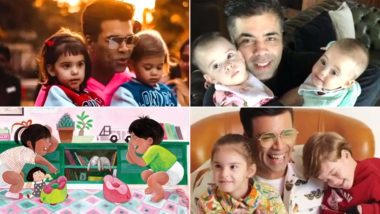 Karan Johar took time off from social media after entertaining us with his banter with his kids, Yash and Roohi. The lockdown with Johars has been quite popular on Instagram with many disliking the fact that the filmmaker decided to end it once the unlock phase began. Later, he was unnecessarily dragged in the Sushant Singh Rajput death case and trolled so brutally that he decided to stay away. But the filmmaker has now started to put up a few sporadic posts and the recent one is of him writing a children's' book. His parenting time has taught him valuable lessons and that has inspired this book called The Big Thoughts Of Little LUV. It's a picture book. Neena Gupta Wanted Shah Rukh Khan And Karan Johar To Help Her Crush Masaba’s Acting Dreams?

Karan's twins Yash and Roohi also have a role to play in the making of this book. He thanked Twinkle Khanna for putting him in touch with people to get it published.

Am excited to share something special with all of you....my first picture book for kids ....#thebigthoughtsoflittleLUV ! Coming soon!!!! Thank you @twinklerkhanna for putting me in touch with the wonderful @chikisarkar ! The picture book will be published by @juggernaut.in

In Hollywood, Channing Tatum did something similar when he locked himself up in his daughter's room and came out writing a book for kids. For Bollywood, it's Karan Johar clearly!

(The above story first appeared on LatestLY on Sep 01, 2020 03:57 PM IST. For more news and updates on politics, world, sports, entertainment and lifestyle, log on to our website latestly.com).