Since yesterday (March 6), rumours had it that Bollywood actor Akshay Kumar might make his way to Kolkata to attend BJP's political rally. Speaking about the same, now, Akki has rubbished the said rumour. Check out the full story. 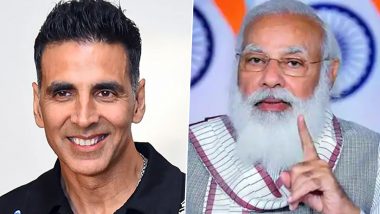 Since yesterday (March 6), rumours had it that Bollywood actor Akshay Kumar might make his way to Kolkata to attend BJP's political rally. Speaking about the same, now, Akki has rubbished the said rumour and mentioned how he was surprised to know that something as such about him can also do rounds. Terming the information 'baseless and false', the 53-year-old actor said that he is busy shooting in Mumbai. Well, that definitely sets the record straight. Ram Setu: Akshay Kumar Begins Script Reading Session of Upcoming Film with Jacqueline Fernandez, Nushrratt Bharuccha (See Pic).

Talking to Hindustan Times, the superstars said, “I am surprised at this level of rumours getting circulated about my presence in the political rally at Kolkata. I am currently busy shooting in Mumbai, and rumours regarding my attendance at a political rally in Kolkata today are baseless and false."Akshay Kumar Gets Permission to Shoot in Ayodhya for Ram Setu: Reports.

Today (March 7), Prime Minister Narendra Modi is said to address a massive rally in Brigade Prade Ground in Kolkata. With this, earlier a few reports hinted that apart from the BJP politicians, a few actors might also make their presence felt at the rally, and that's how Kumar's name also had popped up. Happy Birthday Anupam Kher: Akshay Kumar Extends Warm Wishes for the Baby, Special 26 Co-Star (View Post).

Workwise, Akshay on Saturday had shared a picture on his Instagram handle from the Ram Setu script reading session on Saturday. The photo also saw his co-stars Nushrratt Bharuccha, Jacqueline Fernandez and director Abhishek Sharma. The actor also has Bell Bottom, Bachchan Pandey and Atrangi Rey in his kitty. Stay tuned!

(The above story first appeared on LatestLY on Mar 07, 2021 05:27 PM IST. For more news and updates on politics, world, sports, entertainment and lifestyle, log on to our website latestly.com).