We have listed down five Amrita Rao songs which are damn awesome. Check them out here. 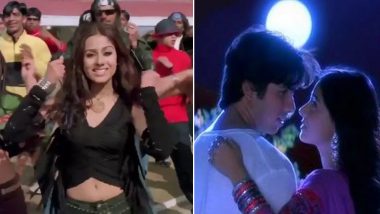 Amrita Rao has been the girl next door for generations. Since her debut, men have fawned over her for her simple, sweet and cute looks. She has done some amazing movies as well. In fact, if there was a poll on who would men love to take home to their mothers, Amrita would have topped it. In an interview, she had even admitted that she likes being that girl too. But it's not that the actress hasn't tried some cocky avatars. In fact, her first film Ab Ke Baras sees her as a wild child and so does her character in the first half of Main Hoon Na. But what stayed in people's minds are her homely roles in movies like Ishqk Vishq and Vivaah. Amrita Rao Birthday Special: 5 Facts About The Actress That Will Leave You Stumped

Let's check out Amrita Rao's songs that are still our favourites.

Amrita embodied the rash tomboyish girl of the generation who holds a lot of grudge against her father. In this song, she manages to portray the character's wild side perfectly.

The feeling of being in love is so precious. This song can be a lovely duet and we would love to be in love like Amrita is in this.

It was the time when Masti was still funny. This song which has all the ladies having fun leaving their husbands worried is quite delightful to watch. Amrita taking the lead here.

Your sweet and coy Amrita can be a seductress too, this song from "Piya Bawri" is proof. Amrita looks extremely beautiful here.

Vivaah is special and so is this song. Amrita and Shahid Kapoor's chemistry has always been electrifying and here, they look even more in love with each other.

Here's some bonus content for you people who didn't know where was Amrita Rao before she debuted! This is one of our favourite Amrita Rao songs.

We are in love with all these songs. Which one of them is your favourite?

(The above story first appeared on LatestLY on Jun 17, 2021 08:20 AM IST. For more news and updates on politics, world, sports, entertainment and lifestyle, log on to our website latestly.com).