On Army Day, Bollywood is feeling proud of the Indian Army and its contribution in strengthening India and making it a superpower. January 15 is celebrated as such because it was the day the first Indian Commander-in-chief was appointed after winning freedom from the Britishers. Ajay Devgn, Mohanlal, Akshay Kumar, Sidharth Malhotra and many more have showered praises. 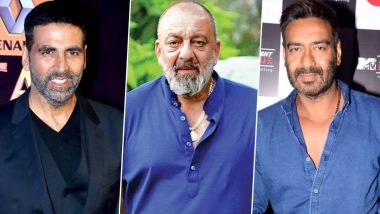 Today is Army day and many celebrities have shared special messages for the Indian army, saluting their bravery and courage to serve the nation. The day marks the handing over of the Indian army to the country's first Commander-in-Chief Kodandera M. Cariappa from General Sir Francis Butcher, the last British Commander-in-Chief of India. It's thus a very important and significant landmark for India who achieved its independence in 1947. Army Day 2021: URI, Kesari, Parmanu – 5 Bollywood Films That Shout ‘How’s the Josh’ and Where You Can Watch Them

Akshay Kumar, Suniel Shetty, Sanjay Dutt, Sidharth Malhotra and others have tweeted shining words about the armed forces who are relentlessly protecting us at the border. Check out the tweets here...

Saluting the courage and bravery of our Indian Army who has always stood strong, even in the most unfavorable conditions. We, as entertainers, can only try to portray your unparalleled commitment on the screens. 🙏🏻🇮🇳 #ArmyDay pic.twitter.com/7jmSHa8zRH

Let's celebrate this day with pride and honour the service rendered by our fearless and selfless warriors. Happy Indian Army Day!#ArmyDay #ArmyDay2021 pic.twitter.com/oumMBHbQjO

Had the pleasure of meeting some of our bravehearts today to flag off a marathon on the occasion of #ArmyDay and what better way to warm up than a quick game of volleyball 😁 pic.twitter.com/PM7vGqr0vo

We are, if our Army is. Saluting every Indian soldier without whom 🇮🇳 can never be what she is; brave, self-reliant & all-sacrificing.

And the silent contribution

To those who sacrifice their comfort, who never show the pain of leaving behind their families, and who are selflessly ALWAYS on duty...

To our men, the Indian Army🇮🇳, I salute you🙏🏼

And your families who's silent contribution for the country can never be forgotten...#ArmyDay pic.twitter.com/FFjjxKUcbf

Amitabh Bachchan celebrates the day with a collage of his own pictures...no surprises there.

T 3784 - On Army Day 15th January .. salute our brave-hearts, their sacrifice for our protection shall ever be honoured ...

Bollywood has often made films on the Bravehearts that we lost at the border saving us from vile foreign attacks.

(The above story first appeared on LatestLY on Jan 15, 2021 03:40 PM IST. For more news and updates on politics, world, sports, entertainment and lifestyle, log on to our website latestly.com).