Army Day 2021: URI, Kesari, Parmanu – 5 Bollywood Films That Shout ‘How’s the Josh’ and Where You Can Watch Them

The love for our brave soldiers and telling their story has been a very old engagement in Bollywood. Movies like URI: The Surgical Strike, Border, Kesari, Lakshya introduced the audience with the different faces of being a soldier. 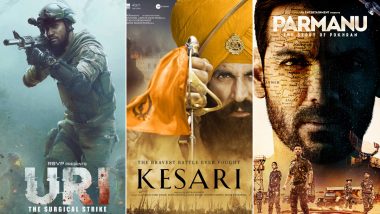 Indian army has always inspired us as citizens and taught us so many stories of courage, bravery and patriotism. Our army has fought every battle without fear and some of these heroic tales have been penned down into stories in the past and have made it to the theatres as well. January 15 is celebrated as Army Day as on this very day back in 1949, our armed forces took charge of our country's safety. It was on this special day that Field Marshal Kodandera M. Cariappa took over as the first Commander-in-Chief of the Indian Army from General Sir Francis Butcher, the last British Commander-in-Chief of India. Army Day 2021 Date, History & Significance: Ahead of 73rd Indian Army Day, Know All About the Day Celebrated in Recognition of Field Marshal KM Cariappa.

The love for our brave soldiers and telling their story has been a very old engagement in Bollywood. Movies like URI: The Surgical Strike, Border, Kesari, Lakshya introduced the audience with the different faces of being a soldier. Where there is a happy victory on one side of this coin, there is a sad counterpart talking about the loss, the pain and trauma that goes into fighting for one's country. No matter what, these films will always have a special place in every Indian's heart! So to celebrate our heroes, here is a list of 5 films that you can watch on this Army Day. Happy Indian Army Day 2020 Greetings: WhatsApp Stickers, Facebook Quotes, GIF Images, Wishes and Messages to Send on Sena Diwas.

URI: The Surgical Strike made Vicky Kaushal a household name and he was everything that people were talking about. The film exhibited the story of the surgical strike that the Indian army carried out after a group of terrorists killed 23 soldiers when they were disarmed. Aditya Dhar and team did not ay detail behind in making this film and the audience got to see not only the heart-wrenching scenes from the surgical strike but also how smartly our army had planned the whole thing. Watch the film for Vicky Kaushal in 'Josh' only on Zee5.

There was a lot of buzz when Kesari was announced. The audience knew that if Akshay Kumar is making a film, it has to be good, but they did not expect it to be this exceptional. The film forays into the time when 21 Sikh soldiers fought against an attack by over 10,000 Afghan invaders. The film is based on the Battle of Saragarhi and the extent that these soldiers go to serve their soil is nerve-wracking. Some scenes in the film will give you literal chills and also educates you about one of the most fearless battles ever fought. Watch the film for some soulful songs, some a-class action scenes on Amazon Prime Video.

John Abraham chooses his projects very wisely and after watching Parmanu, we understood why he chose this film. The story revolves around how a team of soldiers and scientist work together meticulously to make India the sixth country in the world to have nuclear weapons. Based on a true story, the team faces challenges like protecting themselves from the intrusive eyes of their enemies who are tracking their every move. Knowing that this has happened in real life only makes you wonder how these brave hearts carried out such a dangerous mission and makes you respect them even more. Watch this film for John in action on Zee5.

Another gem is Alia Bhatt starrer Raazi. The film is yet again another film inspired by true events. The film tells the real story of Sehmat Khan who had a major contribution in Indian army receiving critical information about the Pakistani army. Sehmat (Alia) is an Indian spy who is married off to a Pakistani officer (Vicky Kaushal). She is trained to use her position and help the Indian army take down Pakistan army's plans to defeat India, The film was packed with emotions and was surely a nail-biting experience. Watch the film for some adrenaline rush only on Amazon Prime Video.

We cannot make a list of movies based on our soldiers and not include this film. Border starring Suneil Shetty, Sunny Deol, Akshaye Khanna and others, this film is one of the oldest memory we all have of a war film. The film which was awarded three National awards is a beautiful story based on the real story of the Battle of Longewala. It was during this battle when Pakistani attacked us on the border of Rajasthan. While the Indian army was outnumbered with only 120 soldiers on the battlefield, they did not spare any chance to win. They managed to hold their ground and a memorial museum in their honour was made on the same spot. The museum has the destroyed Pakistani tanks on showcase as well. Watch this film to listen to its beautiful tracks, its gripping story and some marvellous performances only on Zee5.

In the coming future too, we hope to see many uplighting, moving and heart-wrenching movies based on the lives of our soldiers that celebrate their bravery and strong minds. Join us in wishing our gallant soldiers a very happy Army Day.

(The above story first appeared on LatestLY on Jan 14, 2021 12:30 PM IST. For more news and updates on politics, world, sports, entertainment and lifestyle, log on to our website latestly.com).