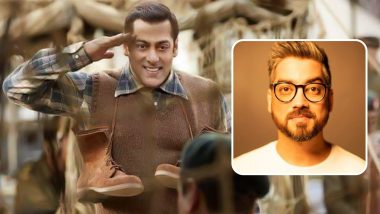 Badhai Ho director Amit Sharma says the Salman Khan-starrer "Tubelight" is an overrated film, and feels he would have done a better job directing it. Sharma opened up when he was asked to name a recent overrated film that he has watched. Asked about a recent film he would have done a better job directing it, he again mentioned "Tubelight". After blockbusters like "Bajrangi Bhaijaan" and "Ek Tha Tiger", "Tubelight" was Salman Khan's third collaboration with director Kabir Khan. The film is based on the 2015 film, "Little Boy", and reimagined against the backdrop of the India-China war of 1962. Bigg Boss 14: TikTok Fame Amir Siddiqui Approached for Salman Khan’s Controversial Reality Show?

On being asked about the one rumour about his "Badhai Ho" lead actor Ayushmann Khurrana that he would like to spread, Sharma said: "It would be that he is the wittiest, and has a mindblowing sense of humour. He has got a plethora of jokes that are amazing." Talking about his popular "Badhai Ho", Sharma said: "The one thing I knew about the movie was that it was a beautiful script and I have to do justice to this." Aarya: Salman Khan Celebrates Sushmita Sen’s Comeback in a True Dabangg Style (Watch Video)

"My background is advertising and because of this, I keep looking for ideas. I never really thought that a certain thing wouldn't work because 'Badhai Ho' had a lot of big ideas," he said on Zee Cafe show, "Starry Nights Gen Y".

(The above story first appeared on LatestLY on Jul 01, 2020 12:18 PM IST. For more news and updates on politics, world, sports, entertainment and lifestyle, log on to our website latestly.com).