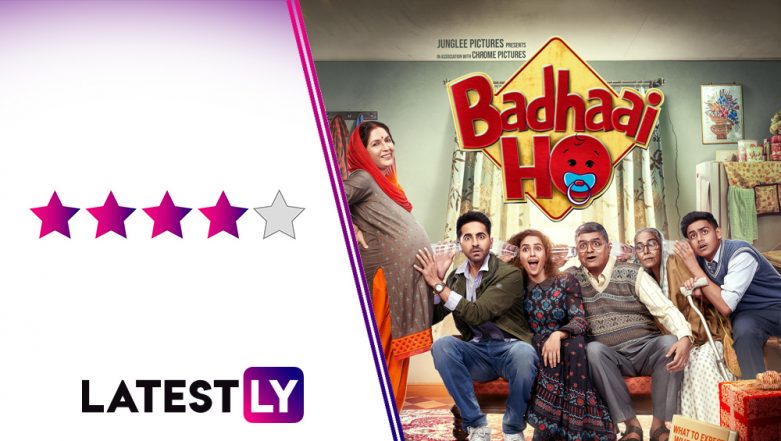 It's quite whimsical that a movie about an unexpected pregnancy begins with a pooja for Lord Hanuman, who is known to be a virgin. Badhaai Ho lives upto that whimsicality nearly throughout the film, making it one of the most entertaining films of the year. And in the process, it also makes Ayushmann Khurrana some sort of casting ISI mark of quality entertainers, coming two weeks after the terrific AndhaDhun. Badhaai Ho may not be a genre-bender as Ayushmann's last release, but it is an equally enjoyable film.

Set in Delhi, Badhaai Ho is based around the Kaushik's, a middle-class family. The father Jitendra (Gajraj Rao) is a railway TTE, the mother Priyamvada (Neena Gupta) is a housewife who takes care of her family members while having her tambola parties under the cover of jagrans. The eldest son Nakul (Ayushmann Khurrana) works in a corporate company and is in love with his colleague, Renee (Sanya Malhotra), while the younger son (Shardul Rana) is in high school. There is also a granny (Surekha Sikri) whose taunts boss over the family.

Things become interesting in the Kaushik household, when Priyamvada gets pregnant and she decides to keep the baby. The news is received with much embarrassment by the rest of the family. Nakul is the most affected by this development, as he refuses to talk to his parents, and avoids his friends and Renee. How the family overcomes their differences and welcomes the good news is what the rest of Badhaai Ho is all about.

While I was watching Badhaai Ho, it reminded me a lot of the 1990 Malayalam movie Pavithram, well, at least the first half of that movie anyway. Both the films deal with a grown-up son reacting to the news of his elderly parents expecting a baby. Both the movies also had the thread where the lead also has to deal with a snobby uptight single parent of his lover. However, the Mohanlal film was a serious movie and is more about how the brother takes care of his infant sister. Badhaai Ho, thankfully, keeps its identity separate as it keeps its focus on the journey of that unexpected pregnancy and the changing dynamics of relationships around it.

The director, Amit Sharma, and his writers, Akshat Gidilal and Shantanu Shrivastav, are well aware of the pulse of today's audience and their love for humour-based films like Bareilly Ki Barfi, Shubh Mangal Saavdhaan, Veere Di Wedding and Stree. They have smartly packaged Badhaai Ho in a humour-laced screenplay that relies on dialogues and situations to make you laugh. The jocular quality of Badhaai Ho is such that it would make you nostalgic about the Basu Chatterjee kind of films we saw in the '80s.

There is a sense of natural charm in how the scenes are brought out. Will take the opportunity to describe the build-up of the conceiving scene, how circumstances subtly lead to the moment. The father brings mangoes from a trip, the mother's emotions are high after a tiff with her mother-in-law. It's pouring hard outside as the father tries to calm his spouse with some poetry, while she has let her hair open. Not to mention, a scene of the younger son rummaging for money in his father's room (it is later shown what else he takes from there) is played earlier. 19 weeks later, the premise gets the coal to go full steam ahead. Well-done!

The first half is funny throughout, especially those scenes where the family receives the news, with the standout being the granny's ranting. Also, the scene where Nakul slaps his younger brother for a very hilarious reason will bring the house down.

Things get a little serious in the second half, and the complications in Nakul's love life is not as gripping as the drama in his own family. The movie's real crisis actually get solved when a main character has a change of heart, so the love story only feels like an added layer to keep the wheels rolling. That said, even the dramatic scenes don't drag and the sentiments are very effective in keeping you invested. There are also a couple of clap-worthy scenes, one where the granny gives her daughter and a daughter-in-law a dressing down for being obnoxious with Priyamvada. And the other is when Nakul takes on a bully in his brother's school and later, his own friend in a matter of minutes with some practised douchebaggery. The climax is very touching, and will make you smile with tears in your eyes.

Sure, there is nothing unpredictable about the movie as every dispute and complication are solved the way you expect them to be. You can also say that the characters feel stock. But if the scenes are written so well and the movie keeps you engrossed throughout, such flaws can be overlooked.

Save for a sad track in the second half, most of the songs don't come as a hindrance in the screenplay and are catchy. Badhaai Ho also keeps its runtime mercifully short and sweet.

I must have praised a lot about Ayushmann Khurrana and his knack of picking up good scripts. Here, I would want to appraise him for not hogging the film and instead, be happy being a part of the ensemble. In many portions, he was almost a supporting character in a movie promoted in his name. Badhaai Ho continues his legacy of being our generation's Amol Palekar or Faroque Shaikh, as the actor delivers yet another crowd-pleasing performance. Sanya Malhotra, who was so good in Pataakha, might not have the spotlight always on her because of the setup. When it does, though, she grabs the opportunity to shine bright and is effortlessly charming in her first urban role. Just check the scene where she tried to suppress her laughter when Nakul breaks the 'good news' to her and you know that Sanya is truly a natural performer.

But Badhaai Ho's real heroes are, of course, Neena Gupta and Gajraj Rao. Neena Gupta brings in a lot of grace as the mother, who takes the snides and snarks in her stride and find the mental strength to deal with having a third kid, despite health and her family against it. Even when you expect her character to burst out at one point, she keeps it consistent with how Priyamvada would have behaved then. Gajraj Rao is simply brilliant as the family man torn between a loving husband, an obedient son and a caring father. He sparkles in the scenes where he talks confidently in broken English to his future daughter-in-law, or when a relative indirectly praises his virility.

Surekha Sikri as the razor-tongued geriatric gets two of the best scenes in the film and she gets away with most of the claps. Shardul Rana is decent. Sheeba Chadha, as Renee's mother, is highly effective in making what could have been a caricatured character grounded.

- The sweet nature of the screenplay

- Conflicts in the plot aren't too difficult to solve

- Nakul and Renee's love story is not as effective compared to the Kaushik drama.

Badhaai Ho may present itself as a funny movie, but it will sneakily touch your hearts with some genuine well-directed emotional moments. Entertaining and engaging, it is another winner from Ayushmann Khurrana, who is becoming one of the most dependable actors in Bollywood. Watch it for the quirky premise, some good laughs and fine performances! Badhaai Ho for the whole team!