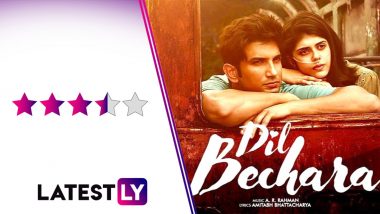 Dil Bechara that will stream on Disney+ Hotstar on July 24 comes with a lot of emotional, sentimental baggage. It would be the last film starring the popular Bollywood actor Sushant Singh Rajput. Rajput had earlier died by suicide on June 14 for reasons unknown. Like with Irrfan Khan's Angrezi Medium earlier this year, Dil Bechara marks the posthumous release for Sushant, whose previous Chhichhore was a big hit. Dil Bechara Trailer: The Tragic Connection Between Sushant Singh Rajput’s Debut Film and His Last Movie That We Just Can’t Ignore (SPOILER ALERT).

Dil Bechara, which has been in the making for two years, marks the directorial debut of casting director Mukesh Chhabra. It is the official remake of the Hollywood hit, The Fault in Our Stars, based on John Green's best-selling novel by the same name. Sanjana Sanghi, who had bit appearances in films like Rockstar, Fukrey Returns and Hindi Medium, makes her leading lady debut.

Earlier titled Kizhie Aur Manny, Dil Bechara is a bittersweet love story of two cancer-stricken youngsters, who find friendship and later romance in their shared mortality. Oscar-winning AR Rahman is scoring music for the film, while Amitabh Bhattacharya has penned the lyrics. You can listen to the songs of Dil Bechara on Jio Saavn.

As for how the songs fare, do check out what we feel about each track:

AR Rahman himself takes the honour of beginning the album by crooning the soundtrack. Mostly using a single beat pattern, the song reminds us of the Tamil tracks that Rahman used to compose in the early part of this century. Lyrics is very okayish ("Dil Bechara, Friendzone Ka Maara"), but the song is likeable enough. Dil Bechara Title Track: Sushant Singh Rajput Leaves Us His Best Moves to Dance to His Memory With This Song (Watch Video).

Mohit Chauhan and Shreya Ghoshal, two of the industry's best singers, come together for this romantic ditty, and it makes for a TREAT. A pleasant melody with some lovely use of violin and piano, and of course, Mohit's trademark humming - "Taare Ginn" should be a hit among the music lovers, even if it hadn't come in the aftermath of the tragedy.

"Khulke Jeene Ka" is the kind of track that may not blow you over in the first listening. Give it a few notes to grow on you, or a couple more listens, and you would soon start liking this track. Arijit Singh never disappoints, and the same goes for Shashaa Tirupati, though she should be been used more than being more of an overlap.

The first impression I had when I heard "Main Tumhara" is that it reminded me somewhat of the lovely Laila Majnu song, "Tum". The slow ballad depends on the talented singing duo of Jonita Gandhi and Hriday Gattani, who do well with the opportunity. The song does give you the feeling that space and time have stopped for you, and that's some feeling for sure!

After the slow mellifluousness of "Main Tumhara" comes a livelier "Maskhari". Hriday Gattani returns, and he is joined by someone who is pro at enhancing these kinds of tracks - Sunidhi Chauhan. More than the music, this time it is Amitabh Bhattacharya's lyrics that work in the favour of the track. Enjoyable while it lasts.

If the title track took you down the memory lane, "Afreeda" is the kind of track you are so used when it comes to AR Rahman's music. It sounds like a cross between the title track of Kadhal Virus (one of Rahman's underrated works) and Khalbali from Rang De Basanti. The Middle-Eastern jigs may have become a cliche for the composer, but still a decent track sung by Sanaa Moussa, while rap portions are handled by Raja Kumari.

You would love the '50s inspired fun imbibed in the "Mera Naam Kizhie", with Amitabh Bhattacharya's lyrics once again stealing the show again. Aditya Narayan and Poorvi Koutish seem to be having a great time singing the track and indulging in the merriment of it all, and it extends to the listeners too.

Rahman returns behind the mike, though this is just a more funky version of the title track. While there are more beats and more spunk in the song, I would rather stick to the original song.

The Horizon of Saudade

"The Horizon of Saudade" is an instrumental piece that depends on the piano and violin to create a beautiful, mesmerising feeling that would work even more beautifully in the film. I am really hoping that.

Dil Bechara is coming in the wake of its lead star's tragic demise. It is also about two cancer patients falling in love, while facing the  consequences of their imminent mortality. And yet the album of Dil Bechara is more about fun, spunk and anything spirited. It may not mark the return AR Rahman to his prime form, but his work here doesn't sound like it is mechanical, as compared to his other recent scores. Recommended!

(The above story first appeared on LatestLY on Jul 15, 2020 05:43 PM IST. For more news and updates on politics, world, sports, entertainment and lifestyle, log on to our website latestly.com).