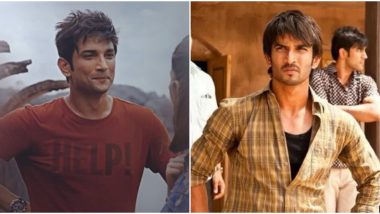 The first trailer of Dil Bechara has been revealed on July 6. It is the directorial debut of the popular casting agent Mukesh Chhabra, and is the remake of the Hollywood movie, The Fault in Our Stars (based on John Green's book by the same name). The movie is very special because it is the last film of Bollywood star Sushant Singh Rajput, who left us last month. Sushant had died by suicide for unknown reasons in his flat on June 14. Like with Irrfan Khan's Angrezi Medium, Dil Bechara becomes a posthumous release for Sushant. Dil Bechara Trailer: 6 Moments From Sushant Singh Rajput and Sanjana Sanghi's Love Story That Deserve Special Love.

Interestingly, Sanjana Sanghi, who had made her debut in Angrezi Medium's prequel, Hindi Medium, is the female lead in Dil Bechara. Sanjana plays Kizie, while Sushant plays Manny - two youngsters suffering from different forms of cancer who become friends and later fall in love. In the original, Shailene Woodley and Ansel Elgort played the leads and it was a huge hit.

Before we go ahead with our article, please do check out the trailer of Dil Bechara first, if you haven't watched it already:

The trailer of Dil Bechara hints that it is very faithful to the original film and the source material. If you have read the book or seen the movie or both, you know that they have tragic endings. In both the book and the movie, Elgort's character is more cheery and lively, as is Sushant's Manny in Dil Bechara. Unfortunately it is his character that passes away in the film just before the climax, with the heroine living to face the emptiness left by his absence near the end.

So if Dil Bechara follows The Fault in Our Stars' premise to the T, we should be brace ourselves for a double heartbreak when we watch the remake. For unless Chhabra does a googly with the script, there is a big chance that we would see Sushant's character passing away on screen. With the actor's demise already troubling our hearts even now, it was really difficult for me to watch the trailer itself, knowing how his fate in the movie would turn out. Dil Bechara Trailer: 'Ye Kahaani Adhoori Hai' Say Netizens as They Miss and Fondly Remember Sushant Singh Rajput (View Tweets).

Dil Bechara's trailer also grimly reminded me of Sushant's debut Bollywood film, Kai Po Che. It is a very dark coincidence that Sushant's character in his first film has a short-lived arc, and the same pattern follows in his last film too (presumably).

An interesting observation to make here is that the book Kai Po Che is based on, Chetan Bhagat's 3 Mistakes of My Life, doesn't have Sushant's character dying. In the book, it is Amit Sadh's character Omi who gets killed accidentally, a fate that goes to Sushant's character Ishan in the film.

The concept of Life and Death has strangely been an eerie factor in Sushant's last couple of movies. Kedarnath, that reworked the romantic thread of James Cameron's Titanic, has Sushant's character die tragically in the climax of the film. Sonchiriya, his best film in recent times, a dacoit saga, that saw Life through the prism of guilt, redemption and death. It also has Sushant's character get killed near the end, sacrificing his life for two innocent souls. Chhichore, Sushant's last release before his tragic demise, was about proving Life shouldn't be ruled by pressures that may make you take steps to end it. Unfortunately, that isn't something Sushant could never apply to his own life.

And now with Dil Bechara dealing with characters enjoying life and love to the fullest before their eventual doomed fates, pretty sure there will be many teary eyes in front of the television and mobile screens. Dil Bechara is streaming on Disney+ Hotstar on July 24.

(The above story first appeared on LatestLY on Jul 06, 2020 08:10 PM IST. For more news and updates on politics, world, sports, entertainment and lifestyle, log on to our website latestly.com).