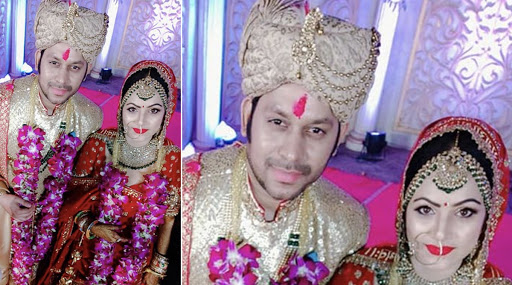 2019 has been really kind to Raaj Shandilyaa whose debut directorial Dream Girl has created history at the box office. The film earned Rs 100 crore. Only a few directors get this lucky to have their first film earn so well. And now he has begun a new inning. Raaj got married to his sweetheart of 13 years Varsha on December 12. The director tweeted their wedding pictures where both looked lovely. Dream Girl Song Dhagala Lagli Kala No More Available on Digital Platforms as it Violates Copyright Issues

Speaking to Mumbai Mirror earlier, Raaj had informed, "The wedding will take place in Jhansi, my hometown, in the presence of family and friends. Later, we will be hosting a reception for my film industry friends in Mumbai.” The love story began in Bhopal when he met Varsha at a common friend's engagement. They kept meeting and stayed in touch even after Raaj moved to Mumbai. Varsha is very critical of his work but really loved Dream Girl.

Here's one more pic from their wedding...

Shandilyaa has plans of making two films in 2020 as per his quote to Mumbai Mirror and would love to narrate one to Ayushmann Khurrana. Well, we can only say fingers crossed and congratulations.