Dulquer Salmaan to Be Seen As the Protagonist in R Balki’s Upcoming Thriller?

R Balki will also produce the film and his team is now on a lookout for a studio to come on board to co-produce this thriller. The makers are yet to decide upon the lead actress after which the official announcement of the film will take place. 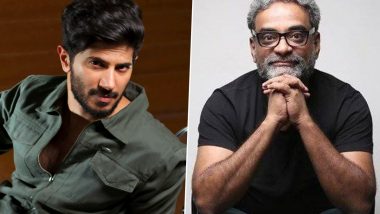 Dulquer Salmaan has a huge fan base in the south and with his Hindi debut film Karwaan, his fanbase has grown even bigger countrywide. The actor managed to impress everyone with his adorable antics in the film and is now reportedly ready to feature in yet another Bollywood film. If the reports are to be believed, the actor will be collaborating with the legendary filmmaker R Balki for his next. The film is said to be a thriller. Dulquer Salmaan Reacts to the Viral Picture With Mohanlal and Prithviraj, Says He Likes the Mystery Behind It.

In the past, R Balki has always created magic with his films and made people fall in love with the characters. He always has chosen a 'slice of life' kind of a story for his films and managed to win the audience's heart. This time around he will be seen experimenting with a thriller film and seeing Salmaan in an action avatar looks like a very good idea to us. R Balki will also produce the film and his team is now on a lookout for a studio to come on board to co-produce this thriller. The makers are yet to decide upon the lead actress after which the official announcement of the film will take place.

Reports also suggested that R Balki had been planning to make a thriller for a long time. It was only during the lockdown that he finally got some time to sit down and finish the script. The screenplay demanded an actor like Dulquer to be a part of if and Balki was very keen on approaching him for the part. Reportedly, the Malayalam actor also agreed to be a part of the film and the shoot for the film will also commence in the next couple of months. Shekhar Kapur Slams R Balki Over His ‘Find Me a Better Actor than Alia Bhatt or Ranbir Kapoor’ Remark.

Dulquer had made his Hindi debut with Irrfan Khan and Mithila Palkar starrer Karwaan. He also featured in The Zoya Factor opposite Sonam Kapoor Ahuja where he essayed the role of a cricketer. Apart from this, Dulquer will be seen in  Kurup alongside Sobhita Dhulipala. He will also be seen in Hey Sinamika alongside Aditi Rao Hydari and Kajal Aggarwal.

(The above story first appeared on LatestLY on Jan 18, 2021 08:16 PM IST. For more news and updates on politics, world, sports, entertainment and lifestyle, log on to our website latestly.com).