Bollywood actor Emraan Hashmi is not just a star, but he is an emotion for his fans. The actor who made his Bollywood debut with Vikram Bhatt’s thriller Footpath in 2003, proved he is here to stay. And as the actor celebrates his birthday today (March 24), let us look at his top five performances until now. 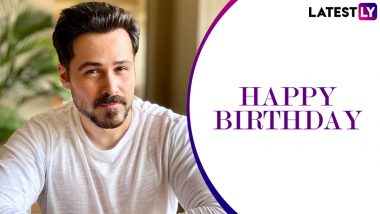 Bollywood actor Emraan Hashmi is not just a star, but he is an emotion for his fans. The actor who made his Bollywood debut with Vikram Bhatt’s thriller Footpath in 2003, proved he is here to stay. Not to forget, the way he performs bold scenes on the big screens, is just wow. However, over the years, he has done films that echoed he is more just a bold star. Now, Emraan has a massy appeal and the audience love him for slaying it on the silver screen with his work every damn time. And as the actor celebrates his birthday today (March 24), let us look at his top five roles until now. Mumbai Saga Box Office Collection Day 4: John Abraham and Emraan Hashmi’s Gangster Film Shows a Dip, Stands at a Total of Rs 10.23 Crore.

Emraan and Vidya Balan serve you romance like never before. The story of a hotel baron falling in love with a not-so-well to do girl is depicted quite well. The chemistry between the leads is the highlight here and of course not to miss, Hashmi’s mature acting chops.

It’s hard to stand out in a women-centric film but trust the b’dy boy to stir magic with his work. He essays the role of a magician who is called Bobo. The plot of this horror flick gets intense after Emraan starts to suffer from hallucinations. Watch the trailer. Mumbai Saga Star Emraan Hashmi Feels He Finally Got Rid of the ‘Serial Kisser’ Tag.

It’s a masala entertainer all the way. Emraan and Vidya give you amazing performances. Based on the life of the controversial figure Silk Smitha, Milan Lutharia casting is so right that it needs a standing ovation. Kudos to Hashmi for winning hearts in this feminist film.

This happens to one of the best performances of Emraan. The film is based on Mumbai’s underworld gangsters Haji Mastan and Dawood Ibrahim. Hashmi plays the role of Shoaib Khan and the way he has gotten into the skin of a gangster is commendable.

That’s it, guys! While there are many movies in which Emraan has done exceptional work, the above ones are our favourites. His recent release Mumbai Saga sees him nailing the cop avatar. We wish the actor lots of success ahead. Happy birthday, Emraan Hashmi. Stay tuned!

(The above story first appeared on LatestLY on Mar 24, 2021 12:00 AM IST. For more news and updates on politics, world, sports, entertainment and lifestyle, log on to our website latestly.com).