Gandhi Jayanti 2021: Road to Sangam, Swades, Hey Ram – 5 Movies on the Father of the Nation That You Need To Stream Today and Where To Watch Them

From teaching about keeping our surroundings clean to preaching about non-violence, the actor has taught us so many valuable lessons. Today marks the 152nd birth anniversary of one of the greatest forefather of India, and in all these years many film-makers have tried to imbibe his teachings, his life on the screen. This has given birth to some really iconic films. 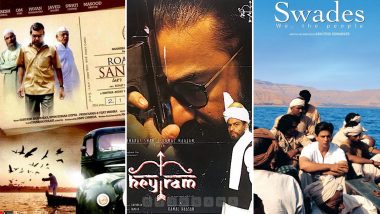 Gandhi, Bapu, Father of the Nation - there are many names for the man who is responsible for the very reason why you and I are privileged to practice our freedom. He fought for the independence of our country years back and left a legacy of life lessons. From teaching about keeping our surroundings clean to preaching about non-violence, the actor has taught us so many valuable lessons. Today marks the 152nd birth anniversary of one of the greatest forefather of India, and in all these years many film-makers have tried to imbibe his teachings, his life on the screen. This has given birth to some really iconic films. Gandhi Jayanti 2021: From Shah Rukh Khan’s Swades to Salman Khan’s Bajrangi Bhaijaan, 5 Popular Hindi Movies Who Solve Their Plot Crises Through Gandhian Ideals!

Let Us Take A Look At Some Films That You Can Watch Today On The Occasion Of Gandhi Jayanti 2021:

Road To Sonam (Where To Watch: Netflix, Amazn Prime)

The 2009 film, Road to Sangam is directed by Amit Rai, and stars Paresh Rawal and Om Puri in lead roles. A part-fact-part-fiction story revolves around a Muslim man, Hashmat who is given the responsibility to fix a truck that would carry Mahatma Gandhi’s ashes. Soon communal riots break out and our lead is in a dilemma, thinking wether he should support his community or do his job.

Satyagrah (Where To Watch: Netflix)

Mahatma Gandhi always talked about non-violence, and he managed to orchestrate one of the largest revolutions ever against the Britishers with the same ideaoligies. Satyagraha was a modern-day tale which chronicled rebellion against corrupt police officers. Amitabh Bachchan, Kareena Kapoor, Ajay Devgn and Arjun Rampal starrer Satyagraha is directed by Prakash Jha and is a must watch film.

Hey Ram revolves around the story of Saketh Ram, a man who is all about with revenge. He does not believe in Mahatma Gandhi’s ways of non-violence and is brainwashed to a gang whose aim is to kill Gandhi. A movie was ahead of its time, the film shows how someone caneasily get manipulated on the grounds of patriotism and religion. Directed by Kamal Haasan, the film stars Kamal Haasan, Shah Rukh Khan, Rani Mukerji, Naseeruddin Shah, Hema Malini.

Lage Raho Munnabhai is amongst the most famous movies that revolve around the teaching of Mahatma Gandhi. The film was the sequel to the Munnabhai M. B. B. S and it highlighted Gandhi’s ideologies as the way of living for the lead character’s — a local don. Lage Raho Munnabhai stars Sanjay Dutt, Arshad Warsi and Vidya Balan and is directed by Rajkumar Hirani. Gandhi Jayanti 2021: Sand Artist Sudarsan Pattnaik Pays Sandy Tributes To Mahatma Gandhi on His 152nd Birth Anniversary.

Swades (Where To Watch: Netflix)

Mahatma Gandhi also is a pillar of patriotism and Swades is a story that revolves around the same ideology. The film is about an NRI scientist who comes back to his home, a rural village. He falls in love with the people and the places so much that he doesn’t want to return. He desires to develop his home and in a way the film resembles Gandhi’s life where he too was a barrister in South Africa before coming back to India to fight for its freedom. Swades stars Shah Rukh Khan in the lead role and is surely a heartwarming film.

These are some of the celebrated films that build upon Mahatma Gandhi’s core values. We hope you spend your Gandhi Jayanti holiday watching one of these.

(The above story first appeared on LatestLY on Oct 02, 2021 04:02 PM IST. For more news and updates on politics, world, sports, entertainment and lifestyle, log on to our website latestly.com).