Good Luck Jerry: Farmer Group Halts the Shoot of Janhvi Kapoor’s Film Again, Reach to the Hotel They Are Staying at

A group of farmers had reached the shoot location in Patiala on Saturday and raised slogans against the shooting of the film in their city. They asked the team of Good Luck Jerry to show support to the farmers. 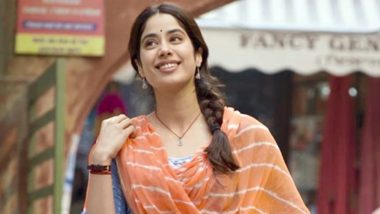 Janhvi Kapoor's next film titled Good Luck Jerry seems to have been facing a lot of hurdles while the team shoot for the film. Earlier, when the crew was shooting in Bassi Pathana, a group of farmers halted the shoot of the film and insisted that Janhvi makes a comment on the ongoing farmers' protest for them to go away. Janhvi then had even posted a story showing her support to the ongoing protest. But something very similar happened on the sets once again. The shoot was halted when a group of farmers came on the sets to protest and ask for their support. Good Luck Jerry: Farmer Group Halts Janhvi Kapoor's Film Shoot, Filming Resumes After Assurance of Support to Protesters.

According to reports in Times of India, a group of farmers had reached the shoot location in Patiala on Saturday and raised slogans against the shooting of the film in their city. They even went to the hotel where the cast and crew was staying at and protested in front of the hotel as well. They asked the team of Good Luck Jerry to show support to the farmers. A source was quoted by TOI saying, "This is not an issue against any actor of film, the farmers wanted them to support their cause since agriculture is something that affects everyone. Not just Janhvi, they also demanded that other Bollywood actors too should come out in support of the farmers."

Talking about the earlier incident, Sukhminder Singh Chauhan, DSP, Bassi Pathana had informed that 20-30 farmers had reached the sets for a peaceful protest. "The shooting had stopped for two-three hours on January 11. There wasn't anything major. All they wanted was an assurance of support from them (the actors). When they did, the shoot was resumed. It was mutually resolved. Now the shoot is going on smoothly," he added. Good Luck Jerry: Janhvi Kapoor Steps Into a Desi Avatar for Aanand L Rai’s Next.

(The above story first appeared on LatestLY on Jan 24, 2021 03:51 PM IST. For more news and updates on politics, world, sports, entertainment and lifestyle, log on to our website latestly.com).