Happy Hardy and Heer: Himesh Reshammiya Fans Can Enjoy His Comeback to Films in a Big Way

Happy Hardy and Heer stars Himesh Reshammiya, Sonia Mann, Manmeet Singh and Naresh Suri, and is directed by Raka. It is produced by Deepshikha Deshmukh and Sabita Manakchand. 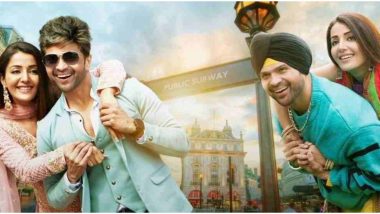 Himesh Reshammiya fans can enjoy his comeback to films in a big way. Himesh who has always been associated with fabulous music and films starring him with some scintillating music in the backdrop – is back with his film Happy Hardy And Heer. The enjoyment is basically a double treat as HR is basically seen in a double role in the film. The idea of a love triangle has not been explored in the movies for a while now and the quandary of a girl caught in a predicament as to who to choose between two men who she knows loves her a lot is the premise of the climax of this tale.

Happy Hardy and Heer stars Himesh Reshammiya, Sonia Mann, Manmeet Singh and Naresh Suri, and is directed by Raka. It is produced by Deepshikha Deshmukh and Sabita Manakchand. Himesh plays the roles of Harpreet Singh Lamba a.k.a Happy and Harshvardhan Bhatt aka Hardy in the film and Sonia Mann makes her debut in the form of Heer – a girl from a small town who moves to a foreign location. Happy is Heer’s childhood friend and loves her with all heart. Happy Hardy And Heer Introduces Topic of Friend-zone: Himesh Reshammiya.

Heer, however, moves abroad and she reciprocates to the advances of Hardy. Then there is a twist of fate and things change around drastically in her life. Now as a girl who actually seems to like both the men, Heer has to make an important decision in her life – Love or luxury?

The songs are actually what binds this very well shot film together. The locations are breathtaking and the scenes are refreshing to the eyes. And a gregarious mix of some foot-tapping numbers to heart touching melodies are what sets this film apart from many other films this season. Songs like Heeriye, Duggi, Aadat and Teri Meri Kahaani apart from the reprised version of Aashiqui Mein Teri from 36 China Town, keep the viewers’ attention intact. Himesh Reshammiya seems to revel in romantic comedies as a lot. Happy Hardy And Heer Trailer: Two Himesh Reshammiyas, One Ranu Mondal and Bhangra Version of Ashiqui Me Teri Make This A Treat (Watch Video).

His personality has a certain charm which helps him do these kinds of characters easily – be it the rich Hardy or the simple Happy who chases his love to London. Sonia has a decent debut in the film which is rich on production values. Reasons enough for you to make sure you watch this musical in the theatres