Helicopter Eela is let down by some contrived writing, predictable screenplay and weak handling of some scenes, making the film very Dheela by the end! 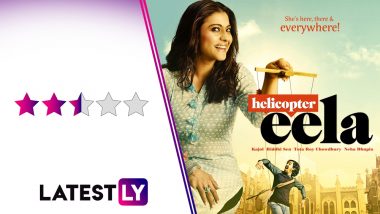 For some reason, we still have movies that nearly tell us the entire story in the trailer itself. Helicopter Eela is one such film where you know how it will start and how it will end, and its sole intention is to reiterate the fact that Kajol should do more films. With a premise that Helicopter Eela has, the idea is to boost the actress's popularity and her mettle. Unfortunately, the helipad is built on such an uneven ground that Helicopter Eela has both a rough takeoff and a choppy landing. (For your safety, some SPOILERS ahead)

The movie begins with Eela (Kajol) joining a very prestigious college as a student. Even before she had started her classes, a top newspaper has already done a story on her. It's amazing how the paper can smell out Eela's aspersions, even without any hue and cry being made on it (while the students of that college are unaware of her entry), and put it on the front page when bigger scams go undiscovered. Ah, anyway, she takes the same courses as her son Vivaan (Riddhi Sen), who is not at all happy to see her there.

And before we find out what's bugging her curly-haired son, Helicopter Eela flies back in time in the '90s where Eela was a model and an aspiring singer with a catchy voice. With the help of her boyfriend (Tota Roy Chowdhury), she gets her big break singing the remix version of Ruk Ruk Ruk song. In this parallel universe, this remix version gets so much popularity that Eela becomes a big-name enough to get an invitation to MTV's launch party, rubbing shoulders with the icons of indipop scene. Navratri Box Office: What the Past Trend Teaches Helicopter Eela, Tumbbad and Jalebi.

But a huge roadblock derails her career and she gets married to her boyfriend. Before we know, Eela has a child and due to some extremely quirky circumstances, become a single mom, who is very over-protective of her son. She is so intuitive about her son that she opens up the front door, even before he touches the doorknob. When he grows into his teens, Vivan is pally with his mom but is resentful of her snoopy ways. So when Eela turns up at his college as his fellow student, it puts further strains on their relationship.

Helicopter Eela is based on a play written by Ship of Theseus fame Anand Gandhi. Have heard that the original play was dark and it seriously discussed OCD. But in adapting the play to the big screen for Kajol and her mainstream fanbase, director Pradeep Sarkar (of Parineeta and Mardaani fame) and his writers have done away with the darkness to make way for a very feel-good premise. In the process, they end up with a tattered narrative with a few good moments scattered here and there.

Helicopter Eela's (btw I don't remember anyone calling Eela by that name. Also Drone Eela would have made better sense) biggest undoing lies in the first half. This whole portion only serves to explain why Eela is at the college, and why she is a single mom. It would never be an issue but the actual narrative has its wheels rolling only at the interval point. The background story would have worked if it was shorter and got to the point faster. Eela's singing career was a bright idea that would have stoked the nostalgic nerve of any '90s kid, especially with the string of surprising cameos (replete with a rapping Baba Sehgal). But they feel so cheesy and badly acted that we get irritated with these scenes. And while we are at cameos, Anu Malik and Ganesh Acharya's appearances invoke unpleasant laughter thanks to the recent #MeToo allegations.

Also, some of the character motivations make no sense. The reason for Eela's husband leaving her was an untested idea, dealing with paranoia, which should have been explored in a realistic way. Instead, it ended up being daft sidenote with no further delving into why he never returned, when he should have. Even Eela's decision to join her son's college felt more like what the plot pushed her to do, rather than what her character should have really done. Tabu REACTS to Kajol's Version of Ruk Ruk Ruk Song From Helicopter Eela.

Helicopter Eela works best when the focus is on the relationship between Eela and her son, and here lies the issue too - The movie's lack of focus. It doesn't know whether to put its spotlight on the relationship or the mom's ambitions and gets confused in the process. The mother-son saga has some sweet-sour feel-good moments and also gives the movie some sort of reliability. That's why the second half fares better than the first. There are also some incredibly-written moments in these portions.

The scene where Eela gets Vivan to talk to a distant cousin, who is recently orphaned, on phone is touching. Although it feels slightly forced, the KBC scene with an Amitabh Bachchan cameo was delightful. Also, the sequence where the father returns to their home after years, and how Eela and Vivan handle this is deftly directed. It also makes us realise Eela's fear for her son, and their love for each other. I wish the rest of the movie were as well-written as these scenes.

For even when the things get better in the second half, we don't really connect with Eela and Vivan's issues. We don't know what's the deal with Vivan's annoyance with his mother. At first, I thought it was because he was feeling suffocated with her constant shadowing. Then he tells her that he wants Eela to return to her singing aspirations. If that's the case, then why did he protest initially when Eela joined his theatre troupe as the lead singer, chosen by their easily irked music teacher (Neha Dhupia)? Or why he chose to leave the house over a little matter? Their friction leads to a cheesily-done finale, where Eela and her group have to perform at the college fest, and a technicality (that is later forgotten for some mother-son melodrama) prevents Eela from performing, only for things to get happily resolved with ease. Though I must add, the stage-choreography was done nicely, save for the unplugged electric guitar bit.

Speaking of other aspects, Helicopter Eela has some nice, picturesque frames courtesy Sirsha Ray. The music by Amit Trivedi (whose song Manja is a recurring motif here) and Raghav Sanchar is pleasant. However, the makeup feels overdone, especially on Kajol.

Kajol lets her natural effervescence seep into her performance as always, which makes us end up rooting for her, despite the breaches in her act. Though it needs a bit more convincing to see her as a mother of a teenager, Kajol manages to pull off her '90s persona with ease. She, however, tends to go loud in many of the lighter scenes, and as a singer, she is as convincing as Aishwarya Rai was in Fanney Khan as a rockstar (read... not a damn bit!). But the actress in hers impresses in the emotional ones.

The National award-winning Riddhi Sen lends good support to her and manages to make a delible impression even with Kajol go firing on all cylinders. Tota Roy Chowdhury adds quite a charm to his limited role, before the narrative shunts him out for silly reasons. Neha Dhupia is fun to watch in the scenes where she interacts with Kajol.

- Lack of focus, especially in the first half

- Relying too much on conveniences

Helicopter Eela might have been the right project for Kajol on paper to make a comeback. To the movie's credit, it maintains the feel-good effect throughout, thanks to the mother-son moments, and that makes Helicopter Eela worth a casual watch. But Helicopter Eela is let down by some contrived writing, predictable screenplay and weak handling of some scenes, making the film very Dheela by the end!

On a separate note, can someone teach the Helicopter Eela team what it means when you say 'Present Day' when you deal with time jumps?

(The above story first appeared on LatestLY on Oct 12, 2018 02:31 AM IST. For more news and updates on politics, world, sports, entertainment and lifestyle, log on to our website latestly.com).