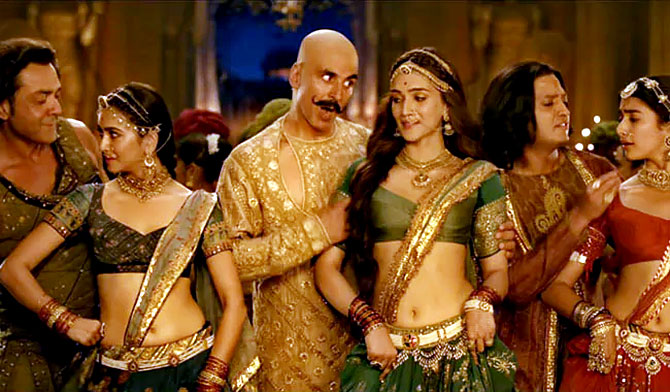 Akshay Kumar's multi-starrer comedy-drama, Housefull 4 released over Diwali this year. The Housefull franchise being one of the most popular ones in Bollywood has now churned out its fourth instalment with a cast including Kumar along with Kriti Sanon, Riteish Deshmukh, Kriti Kharbanda, Bobby Deol, Pooja Hegde in the lead roles. Even as the film received poor reviews from the critics, the film's light genre seems to have worked its charm for audiences looking to flock to theatres over the festival holidays. After a good opening of Rs 19 crore, Housefull 4 collected Rs 18.81 crore on day two of its release.Vijay's Bigil Beats Akshay Kumar's Housefull 4 in Australia On Diwali Weekend - Here's How.

The film faced a slight drop on Sunday, which also happened to be the day of Laxmi Puja. Yet, the film has now crossed the 50 crore mark in three days. The film collected Rs 15.33 on Sunday, thus taking its India collections to Rs 53.22 crores. It has been performing way better than the other Bollywood releases such as Saand Ki Aankh which has collected Rs 2.50 crores and Made In China with Rs 3.75 crores over the weekend. In the South circuits, Housefull 4 has faced stiff competition from Vijay's Bigil which has been leading with big numbers.

In the international circuits, both in UK and US, the South release, Bigil has managed to beat Housefull 4. With Diwali holidays extended to Monday and Tuesday, Housefull 4 is expected to show a jump again from its Sunday collections. Housefull 4 Box Office Collection Day 2: Akshay Kumar, Kriti Sanon and Riteish Deshmukh's Comedy is Stable at Ticket Windows, Collects Rs 37.89 Crore.

This time the comedy-drama comes with a reincarnation twist as the characters will be seen in two eras of 1419 and 2019 and their mix-up is expected to create a havoc that is expected to leave you in splits. Housefull 4 has been directed by Farhad Samji and is produced by Sajid Nadiadwala.