Irrfan Khan Is All Set to Resume His Work in Bollywood; Will Soon Start Shooting for Hindi Medium Sequel

Irrfan Khan will return to India in a day or two. 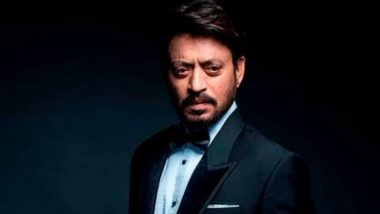 Here's some good news for Irrfan Khan fans! The actor is all set to return to Bollywood and start shooting for Hindi Medium sequel. Irrfan was recently diagnosed with rare cancer, Neuroendocrine Tumour and was in London receiving treatment for the same. His fans were terribly missing their favourite star but Irrfan's optimistic attitude kept them motivated throughout. The actor who starred in the original (Hindi Medium) with Saba Qamar was offered its sequel and there was no way he could deny it. Maqbool Would Never Have Been the Same Without Irrfan Khan, Emotional Tabu Opens Up.

As per a report in BollywoodLife.com, Irrfan is expected to return to India in a day or two. An insider revealed to the publication that he is all ready to start shooting for Hindi Medium 2, which will go on floors in the first week of December. The makers flew down to London to meet Irrfan and narrate him the sequel's script. The actor apparently loved the script and came on board immediately. Irrfan Khan Opts Out of Amazon Prime's Web Series Gormint - Read Statement Inside.

Hindi Medium 2 will be produced by Dinesh Vijan's Maddock Films. The movie will fast forward to 10 years and show Irrfan's bonding with his teenage daughter. The plot will revolve more or less on the same subject but it would be interesting to see what new will the filmmakers offer their audiences this time. Will Saba Qamar be a part of this sequel? Chances are very bleak but let's hope for the best.

(The above story first appeared on LatestLY on Oct 24, 2018 12:55 PM IST. For more news and updates on politics, world, sports, entertainment and lifestyle, log on to our website latestly.com).