The 2-minute long trailer takes us into the life of Harman Baweja's character and his extremely obsessive father (Nana Patekar). Harman wants to live his life on his own terms without any interference from his father while Nana wants everything to work according to him. 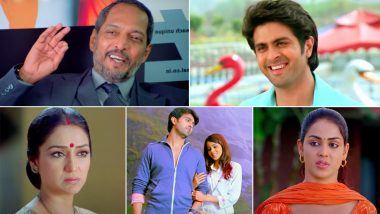 This might come back as a nostalgic moment for all of us but the film that was made back in 2007 is finally getting a release in 2020. Yes, we are talking about Harman Baweja, Genelia D'Souza and Nana Patekar starrer It's My Life. The film is all set to release on November 29 on television and the makers just shared an intriguing trailer of the film to keep up the excitement level. It's My Life: The Delayed Hindi Remake Of Bommarillu Starring Harman Baweja And Genelia D'Souza Will Finally Premiere On TV; Here's How The Cast Looks Now.

The 2-minute long trailer takes us into the life of Harman Baweja's character and his extremely obsessive father (Nana Patekar). Harman wants to live his life on his own terms without any interference from his father while Nana wants everything to work according to him. The clash of idea alleviates when Harman meets a girl (Genelia D'Souza) and wants to marry her but Nana has some other plans for him. The trailer then takes a drastic turn and will leave you wanting to know what happens next.

Seeing Genelia and Harman on the screen will definitely make you feel a little nostalgic but producer Boney Kapoor blames Harman Baweja for the delay. During an interview with TOI, he was quoted saying, “Harman himself is partly to blame for the delay. I wish he hadn’t given priority to his other two films Victory and What’s Your Raashee?. If he had listened to me and focused on It’s My Life, he’d have had a superhit on his hands.” Riteish Deshmukh and Genelia D'souza Recreate 'Tujhe Meri Kasam' Title Track to Celebrate 17 Years of Their Debut Film.

It's My Life is the Hindi remake of the blockbuster Telugu film Bommarillu. The original film was released in 2006 and featured actors Siddharth, Prakash Raj and Jayasudha. The film also features comedian Kapil Sharma in a pivotal role. Directed by Anees Bazmee and produced by Boney Kapoor and Sanjay Kapoor, the film is a light-hearted family entertainer that highlights the complexities between a father and son.

(The above story first appeared on LatestLY on Nov 05, 2020 03:41 PM IST. For more news and updates on politics, world, sports, entertainment and lifestyle, log on to our website latestly.com).