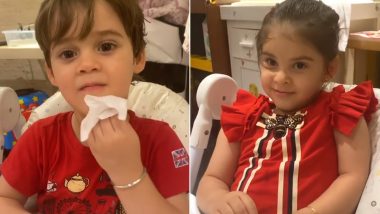 Karan Johar's kids Yash and Roohi are one entertaining sibling duo on Instagram. The cute twins never cease to amaze the Insta-community with their prompt and surprising answers! Their innocence is captured by the filmmaker through short videos which he calls as lockdown series. The latest one is here and it is typically a mini Koffee With Karan episode! The kids revealed that they wanted to play with AbRam Khan (Shah Rukh Khan's son) and Taimur Ali Khan (Saif Ali Khan-Kareena Kapoor's son) in this video. Karan Johar’s Birthday Cake Is Devoured By Yash And Roohi Because They Don’t Want ‘Dadda To Get Fat’ (Watch Video).

It all started when KJo had his in-house KWK style rapid fire round with his children. Yash answered that he was his own favourite person (just like Geet from Jab We Met) and Roohi called that her school teacher her favourite. Then they called each other 'handsome and 'pretty' in next question. In the next answers, Roohi said she would like to play with Taimur while Yash said he wanted to play with AbRam. Check out the video below.

Yash and Roohi On In-House KWK!

Rapid fire with the only guests i can interview!!! Excuse the originality of my questions ... #lockdownwiththejohars

Incidentally, it is also AbRam's birthday today! Had it been a pre-quarantine life right now, these kids might have been playing together at some colourful kids' party!

Jokes apart, but it is indeed commendable how the kids everywhere are putting up with the unusual situation that they don't even understand. Parents too, are doing their best to not let them feel lonely amid lockdown. We hope the corona curve flattens and little munchkins all over get to play around freely!

(The above story first appeared on LatestLY on May 27, 2020 02:45 PM IST. For more news and updates on politics, world, sports, entertainment and lifestyle, log on to our website latestly.com).