Karan Johar kids turn dieticians as they restrict the filmmaker to eat his own birthday cake. Check it out. 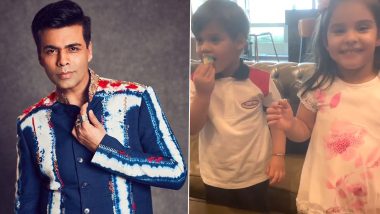 Ace filmmaker Karan Johar celebrates his 48th birthday on May 25, 2020. The director who has given Bollywood many superhit films has been receiving a lot of love from his fans and fraternity friends online. And well, here's the moment all KJo fans have been waiting for as finally, we get a glimpse of Yash and Roohi on the director's birthday. As we are all aware of how everyday Karan shares lockdown with the johar's series featuring his kids on Instagram and today was no different. This time we see the little ones and Karan's mommy celebrating his birthday, but wait as there's a more to the tale. Karan Johar Gets Warm Birthday Wishes From Sara Ali Khan, Alia Bhatt, Kajol, Kareena Kapoor And Others (See Pics).

In the video, we see Karan telling his twins to blow the candles of the cake on his behalf and later we see the fam singing the happy birthday song. However, the funny part comes in when KJo tells Yash and Roohi that he wants a slice of the creamy cake and well the two munchkins say 'NO' to their dad. Reason: the two think that Karan will put on some extra-calories and become fat if he eats the delicacy. Umm, looks like the kids surely dominates Karan. Karan Johar Birthday Special: The ABCs of His Debonair, Eclectic and Flamboyant Avalanche of a Fashion Arsenal!

Well, the above clip is indeed cute and we hope that such dieticians exist in every household. Talking about KJo's birthday, there's no one like him, as in his career so far, he has given many films which rule fans hearts such as Kuch Kuch Hota Hai, My Name is Khan, Kabhie Khushi Kabhie Gham, Ae Dil Hai Mushkil and more.

Besides being this film supremo, Karan is also known to be badass and ultra-glam in real life. His no-filtered nature is the highlight of his personality. Till now Sara Ali Khan, Kajol. Alia Bhatt, Sonam Kapoor, Kareena Kapoor Khan, Jhanvi Kapoor, Manish Malhotra and more have wished KJo on his birthday. Stay tuned!

(The above story first appeared on LatestLY on May 25, 2020 07:48 PM IST. For more news and updates on politics, world, sports, entertainment and lifestyle, log on to our website latestly.com).