Kareena Kapoor Khan Opens Up On Her Pregnancy Cravings; Three Things She Takes to Bed and More!

Kareena Kapoor, who recently shot for a special episode of Discovery+ series Star Vs Food, spoke about her pregnancy cravings, three things she takes to her bed and more. Check out the full story here. 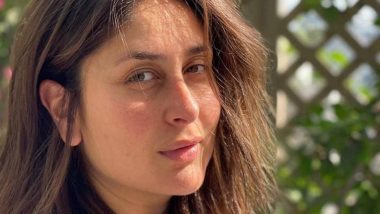 There's no one like Kareena Kapoor Khan in showbiz. The actress who recently embraced motherhood for the second time has time and again broken stereotypes in the industry. Currently, she is having a gala time with hubby Saif Ali Khan and her two munchkins and will be soon seen in a cooking show. Now, Bebo is known to be unfiltered and in the first episode of her show (Star Vs Food), she gave enough deets about her personal life. She opened about what she craved for the most during pregnancy and more. Sharmila Tagore Still Hasn’t Met Kareena Kapoor Khan’s Baby, Here’s Why.

Kareena mentioned how she desired only pizzas and pasta, during her pregnancies. "So, basically like through the pregnancy, I had, it was just like a constant craving of wanting Pizzas and Pasta. It was just weird throughout, both my boys,” she said.

Bebo also added how the Kapoor family is obsessed with food. She said, “Every time we sit at a table, I feel like we are one of those old Italian family, we are screaming, Koi Kha Raha Hai, we are eating, drinking, laughing because food is something that should bring joy to you.” Kareena Kapoor Khan, All Glammed Up and Gorgeous but Totally Engrossed in Her Phone in This Throwback Boomerang Video!

Not only this, during the episode, while interacting with her friends Tanya, Shibani and Anshuka. She also spilt the beans on the three things she takes to her bed, and it's “a wine bottle, pyjamas and Saif Ali Khan.” Aww, so cute.

Meanwhile, on the work front, Kareena will next be seen opposite Aamir Khan in Hollywood classic Forrest Gump's Hindi remake which is titled Laal Singh Chaddha. Further, she also has Karan Johar’s multi-starrer period drama Takht in her kitty. Stay tuned

(The above story first appeared on LatestLY on Apr 15, 2021 10:00 AM IST. For more news and updates on politics, world, sports, entertainment and lifestyle, log on to our website latestly.com).