Kartik Aaryan posted on social media about how he watched his film, Pati Patni Aur Woh, with his parents. He shared a video of his parents' reaction. Kriti Sanon also reacted to the post. 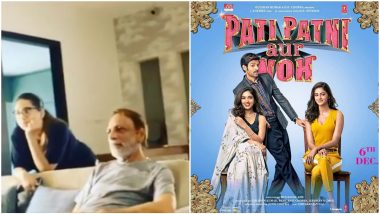 Before Imtiaz Ali's Love Aaj Kal tanked at the box office, Kartik Aaryan was seen in the commercially successful, Pati Patni Aur Woh. The really odd remake of the 1978 film of the same name. The movie featured Bhumi Pednekar Patni and Ananya Panday as Woh. Fans of the actor loved the film. Now, many are rewatching the film and many discovering the film, including Kartik himself. The actor watched the film with his parents and sister, and posted about it on Instagram. Kartik Aaryan Cleans Dishes at Home and Sister Kritika Says, ‘Don’t Mistake This for Quarantine’ (Watch Video).

While sharing the video, he wrote, "Apni picture Sunday ko Family ke saath baithke TV pe dekhne wali feeling...Still unbeaten. And Mummy Never waits for credits (sic)" While his father and sister can be seen sitting on the couch, watching the song before credits, his mother did not wait for it.

Check Out The Trailer Of Pati Patni Aur Woh Here:

Our in-house film critic, Sreeju Sudhakaran, wrote in his review for the film, "You may find the new Pati Patni Aur Woh funny, if you can overlook the gheesa-peetha tropes, bear Kartik in his usual goofy avatar, and find the age-old humour in extra-marital dalliances chuckle-worthy. Otherwise, you can either seek out the original or wonder if like the songs, Bollywood cannot think beyond recycling old movies too."

(The above story first appeared on LatestLY on Mar 30, 2020 12:52 AM IST. For more news and updates on politics, world, sports, entertainment and lifestyle, log on to our website latestly.com).